Sister Margarita Hernandez is director of religious education for the Tri-Parish Religious Education Ministry in Walla Walla, Washington. She felt her life change when she met her new neighbors in the small village of La Papalota in El Salvador in 1995. 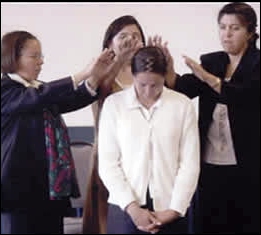 “God, who is Providence, came to me,” she says.

The Sisters of Providence had arrived and they lived right in front of her home.

Margarita was born in November, 1980, in Puerto Parada, Usulutan, and moved with her family to La Papalota when she was 10, seeking to escape from the civil war’s conflict and fear.

Margarita and her older sister Rosa became involved in catechetical programs and youth groups, as well as liturgy preparation and dance groups. The sisters invited Margarita to think about religious life. In 2001 she participated in a Come and See experience and the following year began a longer living experience with Sisters Maria Antonieta Trimpay and Monica Campillay.

Received as a postulant in 2002

Margarita was received as a postulant in September 2002, with her father, brothers and sisters at her side. Her mother had died earlier that year.

During this postulant stage of formation, she hopes to be able to be well formed in order to serve others and in order to become a Sister of Providence, with all the lovely and difficult moments that might bring.

Initially, she feared that she would not make it into the community. She no longer fears this, but does question her own ability to be open in the process of formation. She says the thing that has helped most in her discernment process is “accompaniment by a spiritual director and my own personal prayer.”

One to two years living in community while ministering and/or continuing to attend school.