Sister Karen Hawkins took her final vows in August 2004 in a ceremony in Great Falls, Montana, where she was serving in ministry as an addiction counselor at Gateway Treatment Center.  Later, she became director of campus ministry at the University of Great Falls. Today, she is vocation director and a member of the Formation Team for the Sisters of Providence, Mother Joseph Province. 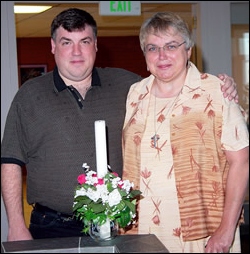 Sister Karen Hawkins took her final vows in August 2004 in a ceremony in Great Falls, Montana. She was serving in ministry as an addiction counselor at Gateway Treatment Center. Today she is director of campus ministry at the University of Great Falls.

Sister Karen is a ‘Sister Mom,’ a woman religious who is also a mother. She entered the religious community in 1997 after spending four years as a Providence Associate. Her adult son Chris was with her as she took her final vows.

Process of commitment culminates during novitiate

From her vantage point as a recently vowed Sister of Providence, Sister Karen talked about her personal process of commitment. Her first year of candidacy was the most difficult stage, she said, but not for reasons you would expect. For the first time in years, she found herself not working for a living.

“The hardest thing for me was in my candidate year,” she said, “because it was difficult going from working all of my life for compensation to not working for compensation.”

It was an adjustment, she said, but like many others, Sister Karen found her commitment to the community during her two years as a novice.

“Once I got into the novitiate, I was inclined to allow myself prayer time and to reflect and read on the vows. It let me see if I was ready to live those vows out with the Sisters of Providence.”

Following three years of living under temporary vows, Sister Karen was ready to start life afresh, as a vowed Sister of Providence. Shortly after taking her final vows, she said she was excited about her decision to join the community.

“More and more we’re becoming a global world, and the fact that we’re an international order is important to me. The range of places where we are is exciting. It’s one of the things that energizes me the most. We have to be more conscious of how our brothers and sisters are living in the world and see what God’s calling us to do. It’s very exciting.”

Sister Karen’s commitment grew out of a lifetime of service: Joining the community was an extension of the person she has always been: “My faith has always been strong and God has always been in my life. And, as a layperson, I was involved in ministry.”

The demands of community

Like others before and since, she wondered if she was up to the demands of living in community, with its emphasis on the group, but her fear quickly disappeared.

“I really like living in community,” she says. “There are the little things like not having to clean the house by yourself or cook every day, (and) if something happens that is stressful or wonderful, you share it.”

Community life presents challenges, she says, just as any intimate living situation does, but shared goals and ideals help smooth over potential conflicts.

“You come from different backgrounds and different ways of being and it’s inevitable to have conflict. The thing that works for me is to talk about it directly to the person in private. People tend to be forgiving in community and it’s because our commitment is to Jesus with the community.

“The longer you live in one house, the more likely that closer relationships happen. Sometimes your interests are just different, so your friends might be outside of the community. I think that it’s good that the sisters are accepting of one another’s family and friends.

“I enjoy being with the sisters. They know that they experience Providence in different ways. It’s nice for people to be open to the experience of God’s surprises in their lives.”

Permanent commitment within the religious community.