History – Just who was Mother Joseph? 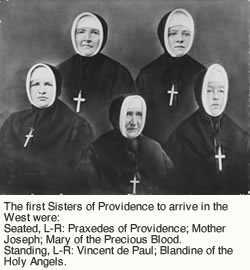 Mother Joseph was a woman of extraordinary compassion, creativity, skill, vision and deep faith who traveled from Montreal to the West with the aim of filling the unmet needs of God’s people on the frontier.

She is pictured here with the four sisters who accompanied her on her trip West.

Under her leadership, more than 30 hospitals, schools and homes were opened for orphans, the elderly and the sick in Washington, Oregon, Idaho, Montana and southern British Columbia. In 1980, she became Washington State’s second honoree with a statue placed in Statuary Hall in the nation’s capitol.

In addition, her birthdate of April 16 is a state holiday.

History in the West