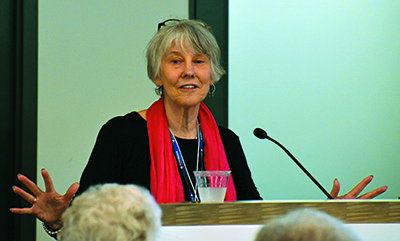 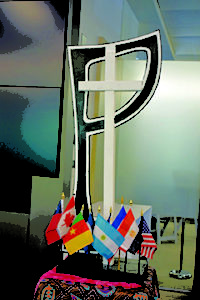 The Providence “P” symbol and the flags of many nations were a reminder of the congregation’s 4 Is: international, intercultural, intergenerational and interdependent.

Provincial Chapter/Community Days began this year with reflection on an important topic for an international, intercultural, intergenerational and interdependent religious community. Participants had prepared by reading a thought-provoking article, “All one body: Forming intercultural communities,” written by Father Anthony J. Gittins, C.,S.Sp.

“I count myself as a woman of Providence,” Patty told the group.

Patty grew up in Vancouver, Washington, and was educated by Providence sisters at St. Joseph School and Providence Academy. She is pastoral advocate for mission with Catholic Community Services of Western Washington.

She has been a lay ecclesial minister for 47 years and is an adjunct faculty member at Seattle University School of Theology and Ministry for the Doctorate of Ministry Program. She also leads retreats and is a spiritual director.

Patty led the group through a three-step process of grateful remembering of being called by God’s Providence, examining how God’s Providence is calling us to live God’s dream now, and identifying the next steps to take, individually and as a community, “to live and embody more fully God’s dream.”

Sister Joyce Green, whom Patty had asked to share with the group, said: “There is no failure; it’s just another outcome.” 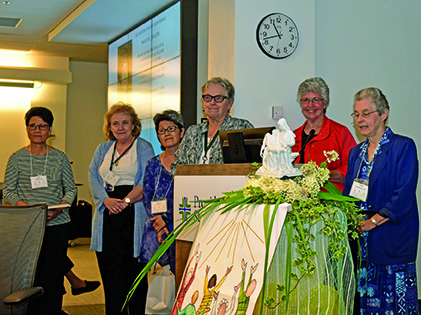 A former chapter committee chairperson, she said it was something she was asked to do and she hesitantly accepted. “Somebody sees something in you; that’s how Providence works.”

Geri Ann Johnson, PA, another person asked to share, said: “Providence provides even if you don’t know you need it. God is pushing and sometimes dragging me.” As a Providence Associate, she continues to ask herself how to continue to serve on this journey with the Sisters of Providence, “to take the risks.”

Patty posed the question: “How is God inviting us into a revolution of compassion and change, to become revolutionaries of radical welcome to each other?”

She also asked the participants to consider how they are living the community’s 4 Is – international, intercultural, intergenerational and interdependent. Sister Marie-Thérèse Gnamazo, from Cameroon, likened the community to a fruit salad, with ingredients that retain their individuality but complement each other. 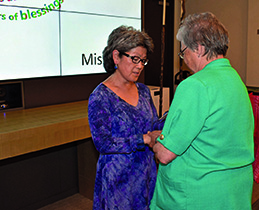 Sister Vilma Franco, from El Salvador, said Providence is transforming her life every day. “I come to offer my heart; who I am,” she said. “I am not by myself; the community is behind me.”

Sister Lucy Vasquez, of the Philippines, said God has invited her to live and embrace the radical welcome. “Faith is not theoretical, but lived” through interaction and community building, she explained.

The Day of Reflection was a meaningful beginning to the sisters’ annual “family reunion.” The remaining two days were spent taking care of community business and hearing from both the General Leadership Team and the Leadership Team of Mother Joseph Province, as well as the Co-Sponsor Council of Providence St. Joseph Health (PSJH). They shared prayer, meals and celebrations, including a special liturgy and banquet for the 175th anniversary of the founding of the Sisters of Providence. Here are a few of the highlights from the 19th Provincial Chapter, facilitated by Sister Peggy Kennedy, SNJM: 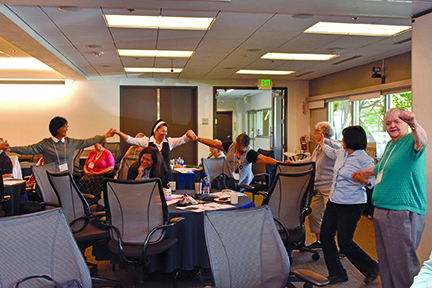 Sisters and associates eagerly accepted the invitation from Sister Margarita Hernandez, MJP’s new vocation director, to join in the dance.