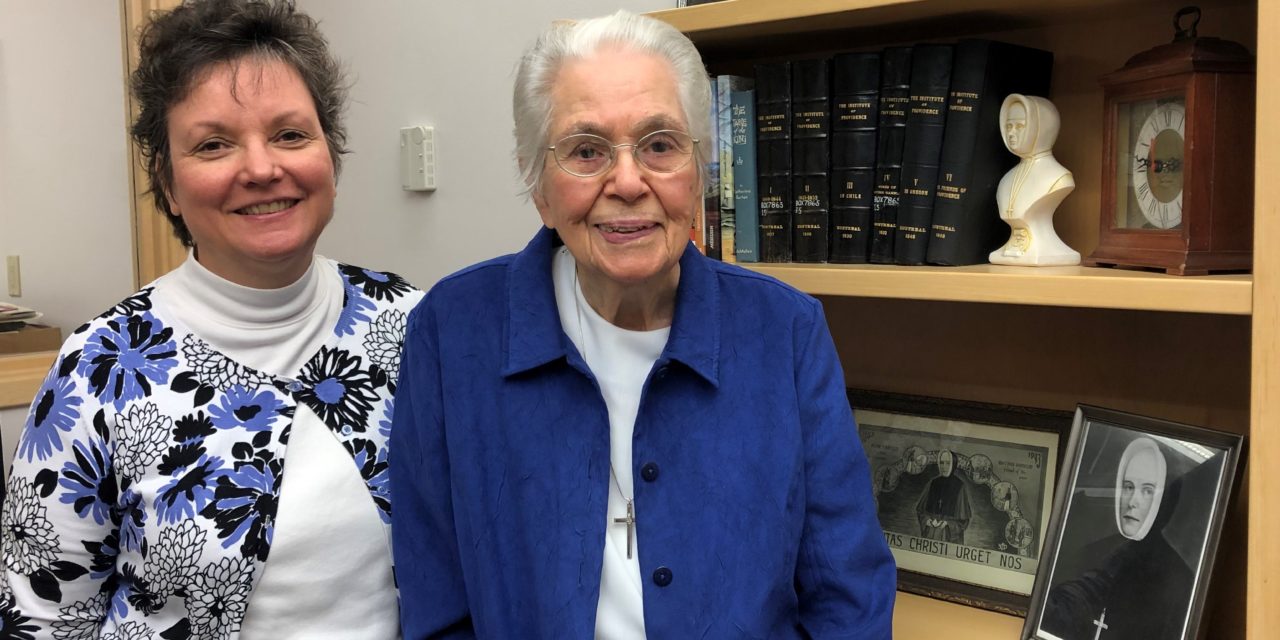 Over the years, Providence Archives has served as keeper of the past for the Sisters of Providence religious community in the West and Providence Health & Services. Officially that means collecting, organizing, preserving and making available records of enduring and historical value relating to the organizations. Providence Archives is also an invaluable resource for tracing the history of the Catholic Church, women, education, health care and social services in the Northwest.

It takes a special person to manage the vast collections of institutional and corporate records, manuscripts, photographs, audiovisual materials and artifacts which are links to the ministries that define the Providence legacy. When Providence Archives was formally established in 1972, Sister Rita Bergamini was the first official archivist. She hired Loretta Zwolak Greene as assistant archivist in 1984. When Sister Rita retired in 1992, she “passed the white glove” to her assistant. For Loretta, 2019 marks 35 years with Providence Archives. For Sister Rita, Loretta’s long tenure is an example of how Providence provides. Here is a bit of the history.

There shall be archives

From the early days of Mother Joseph’s arrival in the Northwest, Sisters of Providence kept an archives. The mandate first appeared in the congregation’s 1858 “Customary Rules,” stating, “There shall be in the secretary’s and treasurer’s office, Archives, which must be placed safe from fire and kept in such good order that it may be easy to find any records.”

Sister Rita first started tending to the archives during her term as provincial secretary from 1964 to 1971. At that time it was in a basement storeroom at Providence Heights in Issaquah, Wash. In 1972 Sister Rita attended an intensive training program on archives administration in Washington, D.C., and made a plan for a formal archives. She took her appeal to the provincial superior and was approved as the first full-time archivist.

Later in 1972, the archives was relocated to the site where it is today at St. Joseph Residence in West Seattle. Though it started out as a few collections in two trunk rooms and a broom closet, Sister Rita had a dream of transforming Providence Archives into a center that would serve the religious community, Providence institutions and the public.

Eager to develop her skills in the field, Sister Rita attended many local and national training courses and professional meetings, and was mentored by a University of Washington archivist. “I was always trying to keep up-to-date since we didn’t really have formal university programs in archival studies at that time; they were just getting started,” explained Sister Rita. Over the next 12 years she relied on sister volunteers, especially teachers who had summers off, to help in the archives with translating, organizing papers and other jobs.

By 1984 Sister Rita needed a full-time assistant and began the search. Loretta applied. She was impressed by the East Coast archivist with degrees in history and library science and a concentration in archival studies, and invited Loretta to interview. Sister Rita shared that during the interview Loretta asked so many questions, she wondered whether she was truly interested in the position. “I told Loretta I would like someone who can be here for at least five years,” said Sister Rita. “Here she is 35 years later!”

As a newlywed, Loretta was pleased to have a job in Seattle where she and her husband had settled. As an archivist, she was intrigued by the opportunity to work in religious archives, an area that was new to her.

Initially, Loretta and Sister Rita spent every day after lunch reviewing materials and artifacts, discussing projects and making strategic plans. “It was very collaborative, in looking back, because it was the way you really learned the collections,” Loretta said.

By 1992 Sister Rita was ready to retire, and Loretta was promoted to archivist. Since then Loretta has successfully shepherded Providence Archives through many changes as the health system expanded, other ministries contracted, two provinces became one, ownership changed, and technological advances altered the way records and artifacts are managed. As more sisters began moving into retirement, being in the “ministry of memory” has taken on even greater significance and opened up new opportunities for mission and heritage education.

Reflecting on 35 years in Providence Archives, Loretta shared a few of the accomplishments she is most proud of: launch of the Past Forward newsletter in 1993; the uniting of Sacred Heart and St. Ignatius Provinces into a new Mother Joseph Province in 2000; the second archives renovation and expansion in 2004; the Sisters of Providence sesquicentennial celebration in 2006; increased outreach through the website, exhibits, tours and accessibility of content; and last but certainly not least, building a team of competent, knowledgeable staff — Peter Schmid, Elizabeth Russell, Pam Hedquist and Jessica Long — and three dedicated sister volunteers who love what they do. “I couldn’t do what I do if I didn’t have them,” said Loretta, “And the archives wouldn’t be what it is without them.”