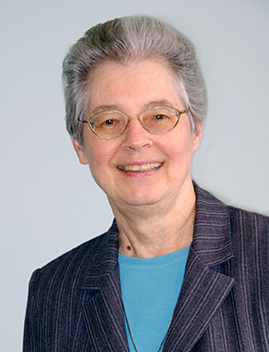 Provincial Councilor Judith Desmarais, SP, was selected to become provincial superior by the Sisters of Providence, Mother Joseph Province, at their annual Provincial Chapter meeting in Renton, Wash., September 9-13. She will continue the balance of the term vacated by Provincial Superior Karin Dufault, SP, who is leaving for Montreal, Quebec, in November to become general superior of the international congregation.

Sister Judith, whose election was affirmed by General Superior Kathryn Rutan and the General Council on September 21, will serve the remainder of the term that ends December 31, 2014. She and Mother Joseph Province’s other provincial councilors, Jo Ann Showalter, SP, and Maureen Newman, SP, will identify a process for naming an additional provincial councilor to serve the remainder of the Provincial Council’s term of office.

Sister Judith was born at St. Elizabeth Hospital in the Yakima Valley and grew up on a hop farm in Moxee, Wash., in a family with five children. She attended Holy Rosary grade school in Moxee and St. Joseph Academy in Yakima. After high school she entered the Sisters of Providence at Providence Heights, Issaquah, Wash., in 1962 and made first profession in 1965. She made perpetual profession in 1971 at Holy Rosary Church in Moxee. In 1991, Sister Judith was elected provincial councilor for the former Sacred Heart Province. She held that position for four years and became interim provincial superior during the fifth year.

In July 1997, during the General Chapter in Montreal, Sister Judith was elected to a five-year term as a general councilor and she subsequently was re-elected for a second term in 2002. Serving on the General Council provided opportunities to live and work in an international and multicultural environment, to get to know the whole congregation and its ministries, and to meet Providence Associates in various countries. In her role, she was privileged to set up the Justice, Peace and Integrity of Creation Center at the offices of the General Administration. As the SP board member on UNANIMA International, the NGO in which the sisters participate, she became involved in the issue of trafficking of women and children, and has continued to work on this in Seattle.

Serving the Deaf Community is a passion for Sister Judith. This call came about during her years of teaching in primary grades in Vancouver, Wash., at St. Joseph School, where she became involved in the religious education program for the students at Washington State School for the Deaf. Sister Judith ministered for 14 years as director of ministry with deaf people, first for the Archdiocese of Seattle and for the Archdiocese of Portland (OR).

After teaching primary grades for nine years, including at Our Lady of Lourdes School in Vancouver, and Holy Family School in Seattle, she attended an interpreter training program in sign language at Seattle Central Community College. During her years of community leadership, she has continued to be involved with deaf people through interpreting liturgy and attendance at various events in the United States and in Montreal. While on the General Council in Montreal she was closely connected with the deaf Sisters of Our Lady of Seven Dolors.

After her council position in Sacred Heart Province, Sister Judith attended the CREDO spiritual renewal and sabbatical program at Gonzaga University in Spokane in 1996-97, enjoying a year of opportunities with international students, theological courses and personal development workshops. She also had the chance to embrace a Third World experience with Sisters of Providence in the Philippines.

Sister Judith holds a bachelor’s degree in social sciences from Seattle University and a master’s degree in theology from St. Mary’s College in Moraga, Calif.