Sister Hong Nga Nguyen, who came to Seattle from Vietnam as a 20-year-old in November 2006 to explore the possibilities of religious life, is overjoyed and overwhelmed by how much of God’s graces and blessings she has received since then. “If you dedicate your life to God totally, what can you lose? That’s it, God! I’m taken!”

That is the exuberant spirit with which she professed perpetual vows of poverty, chastity and obedience as a Sister of Providence in a liturgy at the Vietnamese Martyrs Church in Tukwila, Wash., on Sunday, July 31. A jubilant reception followed in the parish hall. In addition to a lot of discernment and prayer, it has taken a village to get Sister Hong Nga to this point in her journey.

That is, after all, how vocations are nurtured. Nga Thi Hong Nguyen grew up in South Vietnam in a Catholic family with two brothers, two sisters and two aunts who were in religious life and she was a ninth grader when she first received the call to discern a religious vocation. She finished high school and two years of business management at the university at Ho Chi Minh while keeping the desire alive in her heart.

The way forward was paved by a cousin, Sister AnnMary Vu, who had transferred her vows to the Sisters of Providence and was living in Spokane, Wash., at the time. Through Sister AnnMary, Hong Nga met another of Sister AnnMary’s cousins, Sen “Rosa” Nguyen. The two young women were living with the Lovers of the Holy Cross Sisters and others like them who were discerning a call to religious life. It was Sister AnnMary who suggested that they visit with the Providence sisters in America. She connected them with Sister Clare Lentz, a member of the vocation team for the Sisters of Providence, and Sister Clare in turn made the connection to Provincial/Leadership Team Coordinator Margaret Botch, who invited Hong Nga and Rosa to come for a six-month Come and See experience in Seattle.

The village grew with the addition of three housemates, Sisters Blanca Sagles, Jessica Taylor and Karen Hawkins, who guided Hong Nga and Rosa through a succession of “firsts”: sleeping in a bed rather than on a mat, seeing snow, going to a movie, attending a New Year’s Eve party, celebrating a birthday, taking a road trip … And everything was new: the culture, the food, the language, and learning to live out loud –- laughing, talking and praying together, and taking part in decision making with other members of their living community. 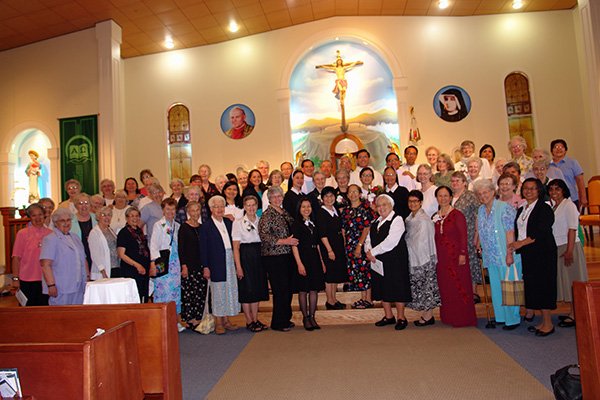 Hong Nga and Rosa visited the retired sisters at St. Joseph Residence in Seattle, volunteered with children and the elderly at Mount St. Vincent, helped out with the after-school program at St. George’s parish, and got involved in the Vietnamese church.

The six months allotted for the Come and See experience flew by, and then they eagerly began a yearlong pre-candidacy, enlarging their village by sharing a house in West Seattle with another group of sisters. Hong Nga entered the novitiate in Spokane in August 2009, and Rosa followed suit a few months later after returning home to Vietnam to visit her ailing mother. They both professed first vows in September 2011 at St. Joseph Residence, Seattle, and renewed their vows in 2013 and 2015. When Sister Hong Nga requested permission to make final vows, Sister Celia Chappell welcomed the invitation to journey with her — another member added to the village. Sister Hong Nga also asked to go to the Philippines for a cross-cultural experience and a 30-day retreat –- more graces and blessings.

Touched deeply by the plight of squatters

Sister Hong Nga returned from a cross-cultural experience with the Providence sisters in the Philippines, where she helped close up a house in Punta and move to another in Mystic Rose.

In addition to cleaning up and packing, she visited a squatters’ area and was deeply touched. “Their houses are smaller than an office for five family members,” she described. “They take off their shoes even though the floor is damp or wet. They need a permit to remodel, but because they don’t own their home, they are not allowed to do that.” She could not help but notice the contrast. “I was living in the house with the sisters and had everything. They were next door but they had nothing. It was sad, but the people were very happy.”

That experience reminded her to take note of the lives of others who have little or nothing. “If I have something I don’t want or need, I remember others,” she explained. “That experience totally changed who I am. I’m a different person now. I was going to change the world, but now I know the world cannot change but I can change.”

Sister Hong Nga chose to make her final vows in a bilingual ceremony at the Vietnamese Martyrs Church in Tukwila, Wash., the parish where she goes every Sunday and sings in the choir. The theme for the Eucharistic celebration was: The love of Christ impels us. Go and bear fruit that lasts. “I want more Vietnamese to know who we are,” she said. “This is a special occasion, yes, but we are here for you.”

“Sister Hong Nga’s journey, from a young, new immigrant as she began to learn about the Sisters of Providence to a citizen of the United States and a professed Sister of Providence, has been accomplished with enthusiasm, joy, challenges and deep faith,” said Provincial Superior Judith Desmarais. “She has experienced care for those who are poor and vulnerable and now is ready to accept this as her life’s ministry as she continues this journey into the future.”

Sister Hong Nga believes in the power of prayer. “I believe prayer works in all circumstances,” she said. “I pray for myself and for whoever asks me to pray for them. Through prayer, I survived my vocation.”

The experience has not been “100 percent what I imagined. Everything and everyone changes. I have changed, too, from the time I came to America, but I am still drawn by the love of the sisters for the poor and they needed. The sisters respond and take the needs of the poor into consideration.”

A blessing found in diversity

The differences from what she expected have included the declining number of sisters, and what she imagined living in community would be like, she explained. But the diversity of being in a local house has been a blessing.

“The community may be richer because of it, but it can be a bit challenging for sisters living together. I did not imagine or expect that.

“I don’t regret whatever happened on the path of my life journey to be a sister,” Sister Hong Nga said. “I say, ‘Yeah, God, what do you really want me to do? What do you want me to learn? I have learned more and received more than I give.”
Her life has been one of blessings, from the sisters, the province and everyone she has come to know.”It is amazing how religious life can form/transform you into, hopefully, a better person,” she added.

There have been many in her quarter

Her biggest joy on the journey has been the sisters who have taken her by the hand and walked with her. (There’s that village again!) She recalls how Sister Carla Montante taught her English, how Sister Jessica Taylor taught her to drive, how Sisters Joan Gallagher and Celia Chappell answered all of her questions and patiently explained things, and how a host of other sisters, in Mother Joseph Province and beyond, let her know they were cheering her on through the journey.

It has helped to have so many in her corner, through the ups and downs along the way. One of the disappointments was that her parents were unable to get a visa to come to the United States for the vow ceremony. Instead, she went to visit them in Vietnam afterwards. She knew she was doing something that would make them proud and happy. Her eyes brimmed with tears when she shared that, but they quickly brightened again. “It is a joy that God is always with me,” she said. “Maybe God is asking me to be more patient.”

Today, Sister Hong Nga lives in Seattle with Sisters Maureen Newman, Jessica Taylor and Huong Nguyen. In the fall, she will begin a nursing program at Seattle University to become a registered nurse. &ldquo;I need a nursing background; it gives a lot of doors,&rdquo; she explained, &ldquo;including opportunities to get involved in ministry in health-care settings and to offer help for the poor. That has been my desire and my dream when I was asked what I wanted to do —  nurse.”

She told herself while volunteering at Swedish Medical Center in Seattle, “someday I will get into that school and take the nursing course. It’s taken me almost 10 years!” Despite the pressure of learning not only the English language but also the language of science, that dream is coming true.

Sister Hong Nga, the youngest of 125 professed sisters in Mother Joseph Province, embraces wholeheartedly the charism and mission of the religious community, which is international, intergenerational and intercultural. She describes the religious community as “the best school with no graduation date. I am enrolled in the school of the Sisters of Providence. I love that!”