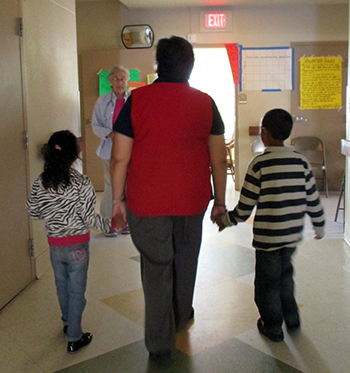 On one Sunday each month, you will find Sisters of Providence united with others in a prayer vigil in downtown Seattle to raise awareness about the problem of human trafficking. Once a year, you will find us engaged in peaceful, nonviolent protest of the School of the Americas in Fort Benning, Ga.

At other times we are at immigration rallies, corresponding and visiting with legislators to discuss vital issues, and taking a stand in corporate boardrooms.

Center for Justice, Peace and Integrity of Creation

As part of Sisters of Providence International, Mother Joseph Province is involved in the Center for Justice, Peace and Integrity of Creation (CJPIC). It was created in 2005 in Montreal to provide information and support for the sisters and their ministries on global social, environmental and political issues.

In addition, Sisters of Providence, Mother Joseph Province, is one of seven religious communities that co-sponsor the Intercommunity Peace & Justice Center.

Founded in 1991, the center is a nonprofit organization that networks with a broad range of community and religious groups. IPJC “acts for justice in the church and in the world.”

IPJC’s website includes resources for action on various topics, from awareness to involvement to leadership. Under IPJC’s umbrella is the Northwest Coalition for Responsible Investment (NWCRI), founded in 1994, which welcomes membership of any faith-based institution, religious community or its related organizations located in the Pacific Northwest. 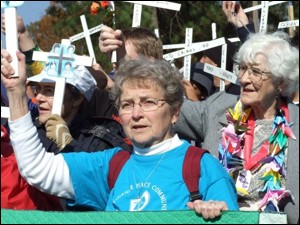 Sr. Charlene Hudon participates in a demonstration against the School of the Americas in Ft. Benning, Georgia.

IPJC is “a regional collaborative organization of faith-based institutions committed to using their power as investors to shape a more just world. Members use their rights as shareholders to dialogue with companies about corporate policies and practices in order to promote peace, and economic and environmental justice.”

For more on the Sisters of Providence involvement in environmental issues, and specifically water as a justice issue, visit Reclaiming Earth.

IPJC’s website resources include a continuum of action to push for an end to the death penalty. The continuum begins with strategies for awareness, then for involvement, and finally for leadership on the issue.