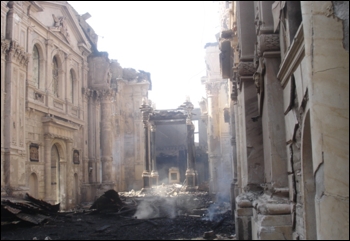 It also destroyed the historic church Sisters of Providence church and Bernarda Morin Province’s museum on the campus.

More than 15 volunteer fire departments responded to the scene to fight flames that were up to 50 meters high. The 30 women who reside at the home for the aged were safely evacuated and no injuries were reported.

General Superior Kathryn Rutan, SP, reported that the novitiate collapsed and there was significant fire damage to the SP Church, which is “a national monument and a very precious patrimony of the Sisters.” 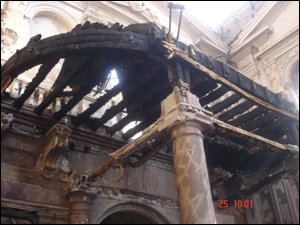 The province’s museum houses many artifacts from Mother Bernarda, foundress of the Sisters of Providence in Chile, and other sisters. The local house, the provincial house and the infirmary were not damaged.

According to news reports, Monsignor Ricardo Ezzati, Archbishop of Santiago, called the fire on the campus of the Sisters of Providence, “a moment of pain for the Church.” The archbishop expressed hope that the church can be restored.

In a message to the international community, Sister Kathryn wrote:

There are no words to express our deep union with you at this time of loss and sadness. The fire that has destroyed the precious patrimony of Bernarda Morin Province is a tragedy, not only for the Province, but for the entire Congregation. The losses of this fire are not able to be measured, are not replaceable, and the consequences will be felt for a long time.

“We’re grateful that no lives were lost, that no one has suffered physical injuries and that the Sisters were able to rescue the remains of Mother Bernarda from her new crypt in the Church in time. However, we understand that the Provincial Museum, with its precious artifacts, books and historical treasures, was destroyed in the fire. As of yesterday evening (Tuesday) under the watchful eyes of the firemen, the fire was smoldering and continuing to burn in some places …

“We count on your prayers and we trust that, even in this painful and tragic event, there is a loving Providence that brings new life out of the ashes. This faith is being expressed by the Sisters of Bernarda Morin Province even as they live through the tragedy and become aware of its consequences.”

Two Sisters of Providence in initial formation from Chile, Srs. Marcia Gatica and Marisol Àvila, are staying with the sisters in Seattle as part of an international formation experience. They have been following the news closely and Sr. Marisol has provided translations of the latest developments in Chilean newspapers online.