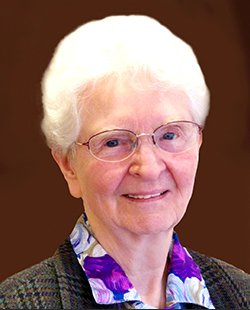 Sister Mary Fox was born in Vancouver, Wash., the oldest of three children in a German/Irish family. An aunt and a cousin were Sisters of Providence.

Inspired by her teachers at Providence Academy, she entered the religious community in 1946 at Mount St. Vincent, Seattle. Slated to become a teacher, instead her first ministry was as assistant bookkeeper at the old St. Vincent Hospital in Portland, Ore.

Years later she had the opportunity to teach as a novitiate officer in charge of the pantry, the sisters’ refectory and the sewing room.

She worked on the switchboard at Providence Heights in Issaquah, Wash., for five years and then began her favorite ministry, 18 years as school secretary at St. Joseph Elementary School in Vancouver. Next she spent 12 years as secretary to the director of volunteers and in the gift shop at Providence Portland Medical Center.

She retired in 2002 and volunteered at St. Joseph Parish in Vancouver.

In 2012 she was the last sister to leave Vancouver since Mother Joseph arrived there in 1856. Today she resides at St. Joseph Residence, Seattle, where she is a sacristan and serves on the Alms Committee.

“Every day is joyful being with the sisters here,” she said. “The past is past and I’m looking forward to the future.”

In 2012 Sr. Mary was the last sister to leave Vancouver since Mother Joseph arrived there in 1856.