(Sister Mary of the Holy Trinity) 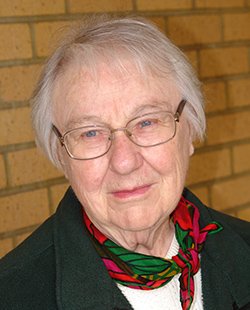 her two brothers and a sister were born in Yakima, Washington, to a Bohemian mother and an Irish father. “I have a curious mind; I always have had,” she said. As a very young child, she asked her mother why water froze. Her mother’s response was, “because that’s how God did it.” It was a WOW experience, thus imprinting a lifelong idea about God.

Small wonder that she chose philosophy for her college major at Seattle University, where having classmates of different races, ethnicities and professions was an awakening after growing up in largely white Yakima. After graduation, two years studying part time with a Reed College professor using original sources set her on a search for truth and reality in all things. She entered the Sisters of Providence in 1956, continuing to teach at all levels except grade school after her vows. She earned master’s degrees in history and theology, teaching history in the College of Sister Formation. She also served on the Formation Team.

Sister Roberta served on the revision committee working on the 1982 Constitutions and was later elected to the General Council, serving in Montreal for 10 years. In that role, she traveled to Egypt, Chile, Argentina, Haiti, El Salvador, the Philippines and Cameroon, plus to a United Nations forum for women held in Nairobi, Kenya, in 1985. She was the last provincial for the former Sacred Heart Province and then she served on the first Leadership Team of Mother Joseph Province from 2000 to 2004.

She taught at Heritage University in Toppenish, Washington, until the age of 80. While there, she took a semester leave of absence in 2010 to minister with the Sisters of Providence in Egypt, who house and educate girls. Sister Roberta would love to go back if the presence of an American would not endanger the sisters there. Instead, she will stay in Yakima, where she is on the board of Rod’s House, participates in Act Yakima, a protest group that supports the Black Lives Matter movement, and meets with groups to share information on issues like immigration, the refugee travel ban and abortion.

“Pope Francis has said to get out of the convents and into the streets. We try to do that. People know to come to the sisters if they need spiritual or material help. We keep the yard beautiful with flowers, and we never proselytize,” she said. “The idea is to live in neighborhoods and be neighbors, and that is exactly what the Sisters of Providence will continue to do in Yakima.”

Pope Francis has said to get out of the convents and into the streets. We try to do that.

People know to come to the sisters if they need spiritual or material help.