A new book about inspiring women in Walla Walla, Washington, was featured in a book release party held November 30 at that city’s YWCA. The book project is part of the 100th anniversary celebration of the YWCA’s presence there.  Proceeds from the book will go to YWCA Walla Walla’s Next Century Fund, an endowment to support future YWCA programs for women.

Mother Joseph of the Sacred Heart is one of the women featured with a brief written tribute and two images, one of Mother Joseph and the other of St. Vincent Academy in Walla Walla in the 1880s.

The words are as follows:

Mother Joseph of the Sacred Heart 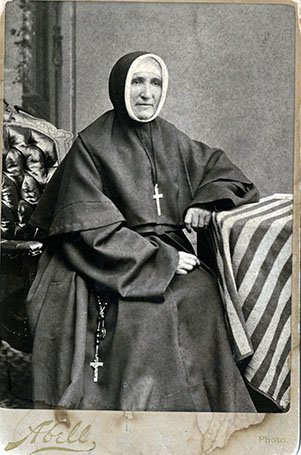 Mother Joseph, born Esther Pariseau on April 16, 1823, on a farm in Quebec, Canada, arrived with four other sisters to the Washington Territory in 1856. She was invited to Walla Walla in August 1863 by the vicar general of the Diocese of Nesqually to explore a potential site for a school.  Mother Joseph and Sister Catherine arrived after a journey of three or four days by small boat and stagecoach and were cordially welcomed in the town of forty to fifty families, the majority of them Jewish.Because of other pressing requests and a scarcity of sisters, founding of the school in Walla Walla would wait until one first was established in Steilacoom.  On February 18, 1864, the Sisters of Providence opened the school in Walla Walla with 60 to 80 children over the year.

Mother Joseph also supervised construction of St. Mary Hospital. The sisters’ chronicles recount challenges including incompetent workmen, dishonesty and lack of funds.With the help of ladies of the parish, the sisters held a bazaar on December 1, 1879, to raise money for the construction. They also went on a begging trip in the mountains, during which they got lost and had to spend an unsheltered night in the rain, with a “wolf on the prowl to keep them company.” The begging trip raised $700, and $3,272 was collected by their patron Mrs. George Thomas and Sister Agnes.St. Mary’s Hospital, the first hospital built in Eastern Washington, opened January 27, 1880.

Under Mother Joseph’s leadership, more than 30 hospitals, schools and homes were opened for orphans, the elderly, and the sick in Washington, Oregon, Idaho, Montana, and southern British Columbia.  Her motto was expressed on her deathbed in 1902 at the age of 79: “My sisters, whatever concerns the poor is always our affair.”