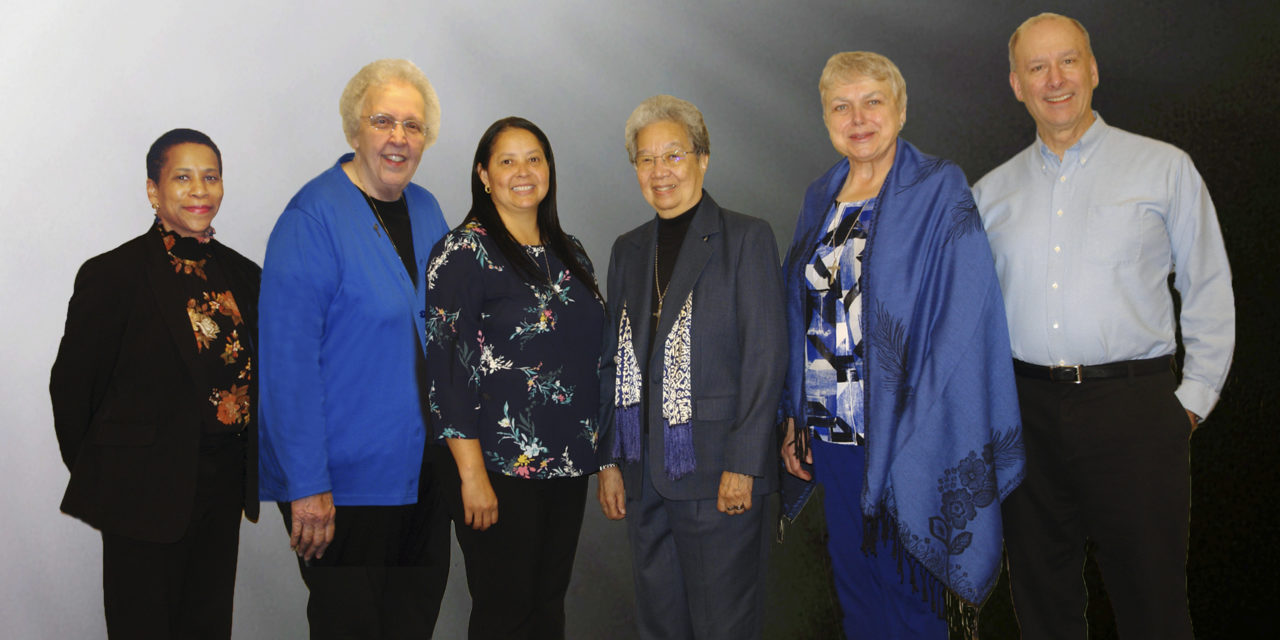 In addition, two laypeople have been appointed to serve on the Leadership Team: David Neisius, provincial treasurer and Elinor Alexander, provincial secretary.

The provincial leader and councilors were elected by the sisters in Mother Joseph Province in June 2019, during the Discernment Chapter of Elections in Renton, Wash. They were confirmed by the congregation’s General Council in Montreal. David and Elinor were both previous employees of Providence. The team’s term will extend through 2024.

Learn more about the Leadership Team members below.

Originally from Chicago, Sister Barbara Schamber entered the Sisters of Providence after graduating from Providence High School, Burbank, when her family moved to Southern California.

Sister Barbara was educated in the College of Sister Formation of Seattle University where she received a bachelor’s degree in social sciences. She completed her master’s degree in educational administration at Central Washington University.

Though her early ministries focused on teaching and administration in Providence schools in Seattle; Vancouver, Wash.; Portland and Burbank, Sister Barbara’s service over the years has included leadership roles in the religious community and Providence health system. She served as provincial superior/chair of the board for Providence Health Corporation, became the first provincial superior of Mother Joseph Province and presiding member of Providence Health System and Providence Services, co-chaired the Sisters of Providence Sponsorship Committee which recommended the public juridic person model used by the organization today, and served as sponsor of Providence Ministries since its inception.

In the wider community, Sister Barbara served as trustee for Catholic Community Services and Archdiocesan Housing Authority, Western Washington; member of Women of Providence in Collaboration; and member of the Catholic Health Association Sponsorship Committee.

Sister Jacqueline Fernandes traveled from her family home in Hong Kong to the U.S. to join the Sisters of Providence. Her educational background includes coursework from the College of Sister Formation of Seattle University and Seattle Community College.

Sister Jacqueline’s ministry began at St. Vincent Hospital, Portland, Ore., as admitting clerk. As she developed her business skills, she was assigned to the office of the provincial treasurer where her responsibilities grew through the years, including positions as community budget advisor, community financial advisor and assistant to the provincial treasurer. Her next assignment was Providence High School, Burbank, Calif., as office manager, treasurer and registrar.

Sister Jacqueline was then called to serve as provincial councilor for the former Sacred Heart Province and for Mother Joseph Province. Her responsibilities included coordination of the sisters’ ministries, and provincial council liaison to the province Formation Team. During these years she also was on the board of Intercommunity Housing of Seattle, served on the Alaska Airlines Customer Advisory Board and was a member of the Leadership Conference of Women Religious, Region XV.

Sister Karen Hawkins took a less traveled path to religious life, first becoming a Providence Associate, then making her vows as a Sisters of Providence later in life after raising a son.

Her education includes a bachelor’s degree in human services with a minor in addiction counseling from University of Providence, Great Falls, Mont., and a master’s degree in transforming spirituality from Seattle University.

After a career as a financial analyst, Sister Karen’s focus shifted to health and human services when she became a Sister of Providence. Her ministries have included certified nursing assistant at Providence ElderPlace in Portland, Ore., campus minister at University of Providence, addiction counselor in Great Falls, care manager at Sojourner Place transitional home for women in Seattle, vocation director and formation director for the religious community, and board of directors for the national Religious Formation Conference. Sister Karen also recently volunteered at the U.S.-Mexico border assisting immigrants and refugees.

Originally from El Salvador, Sister Margarita Hernandez lived next door to the Sisters of Providence mission in her hometown, which inspired her to enter the religious community.

Sister Margarita’s ministry experience began at Our Lady of Guadalupe Parish, San Marcos Lempa, El Salvador, where she worked with the base community, provided in-service education for catechists and volunteers, and built community among them.

Within the religious community, Sister Margarita co-chaired/chaired the chapter planning committee, and served as vocational director for the province. At the diocesan level, she co-chaired V Encuentro for the Diocese of Spokane and co-directed a training program for catechists. At the parish level, she served as director of religious education and catechist.

Elinor Alexander’s rich and diverse experiences in community action at home and abroad have engaged her in a variety of roles.

Most recently, she worked on special projects for Sisters of Providence. Prior to that, she held positions as global education specialist and network lead for World Vision International; global ambassador and trainer for the Global University of Lifelong Learning; director of administration, co-founder and professional coach for EducateSuccess; development director for Women’s Leadership Network; high school department head; and prison outreach director and board member for Christian Aid, U.K., and Schema Therapy Institute.

Elinor holds a professional doctorate in leadership development and a master’s degree in education. She currently serves as board president for REACH, an ecumenical nonprofit serving families experiencing poverty and homelessness in Renton, Wash.

Originally from Wisconsin, Dave Neisius graduated from University of Wisconsin, Madison with a bachelor’s degree in accounting and a master’s in business administration.

David moved to the Seattle area to work in public accounting, and spent 35 years with Providence health system in various finance-related positions at the system and regional level. He began as assistant controller in Washington and later held positions as system director and regional director of financial consulting services in Oregon.