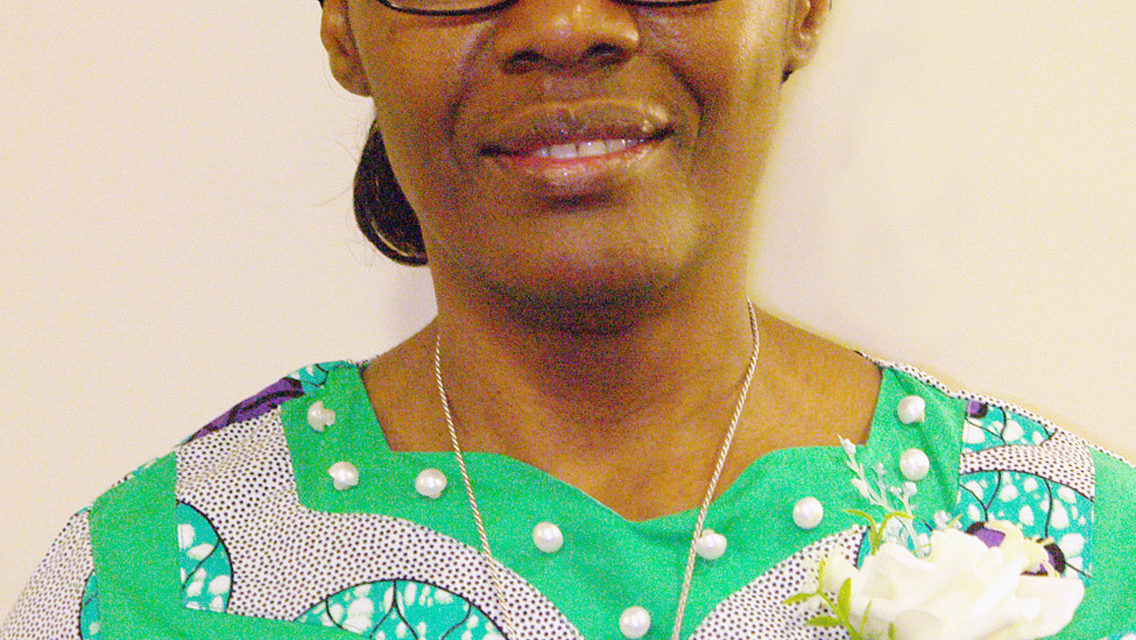 Sister Marie-Thérèse Gnamazo of Cameroon made first profession of vows as a Sister of Providence in a multicultural liturgy on Nov. 23, 2019, in the chapel at St. Joseph Residence (SJR), Seattle.

“Marie-Thérèse Gnamazo, SP, is a woman of faith, called by Providence to journey to a new land, to offer her life in service to others as a religious sister,” said Provincial Leader Judith Desmarais, SP. “She is concerned with and has a heart for those who are most vulnerable and in greatest need. She established a nonprofit organization, African Solidarity in Action, to help children in Cameroon, in the area where she grew up. Her love of God and love of people is evident in all she does, generously and competently.”

The ceremony was attended by Sisters of Providence from Washington, Oregon, California, El Salvador, the Philippines, Chile, Alberta and Quebec. Others in attendance included Sister Marie-Thérèse’s relatives from France and Cameroon, the choir from her home parish, Our Lady of Guadalupe in West Seattle, and three Ugandan sister from the Daughters of Mary who accompanied the choir on the drums. The liturgy incorporated prayers and song in Sister Marie-Thérèse’s native language, as well as French, Spanish, Vietnamese and Tagalog in honor of the international sisters and guests.

Incorporating both a traditional and contemporary approach to the ceremony, Sister Marie-Thérèse’s brother, sisters, nieces and nephews celebrated with her virtually. They attended Mass and a party in Cameroon, while viewing the Seattle festivities real-time via livestreaming on WhatsApp.

The first vows liturgy was followed by a simple afternoon reception at SJR. In keeping with the tradition of Sister Marie-Thérèse’s culture, a festive evening event hosted at nearby Caritas Court, (a Sisters of Providence residence) brought together sisters, family and friends to enjoy a lively celebration featuring African music and international food prepared by the religious community.

“First vows are really important because they are my ‘yes’ to God,” said Marie-Thérèse. “Taking my vows is a continuation of my life as a sister. I will live those vows and continue to learn and serve the poor as Blessed Emilie Gamelin did.”

Originally from the rural village of Lomié in eastern Cameroon, Marie-Thérèse is one of eight children born into a poor but faith-filled family. Her father died when she was nine and her mother worked multiple jobs to provide for her children. Sister Marie-Thérèse described her mother as a model of hard work and generosity. Her mother died in 2017, shortly after she became a novice.

Marie-Thérèse first felt called to religious life at age 14. While she was encouraged in her calling, she was encouraged first to finish high school and college. After completing her education at Gregorian Pontifical University in Rome, she embarked on a period of discernment through discussions with a pastor and conversations with Sisters of Providence. She relocated to Seattle for a Come & See experience 2008-10.

Because she was not yet certain of her calling, Marie-Thérèse chose to become a Providence Associate and return to her hometown in Cameroon, inspired by the spirit of foundress Blessed Emilie Gamelin and the community’s charism to serve those who are poor and vulnerable. In the ensuing seven years, she made a significant impact in villages around Lomié, Abong-Mbang, through a nonprofit she founded called African Solidarity in Action. Through this organization she raised funds to build a well to provide clean water for residents. African Solidarity in Action has since expanded to offer tuition support for more than 30 youth, and training to become a nurse or teacher, and built a small clinic and residence.

Despite this, Marie-Thérèse felt “God was asking me to do more.” She wrote a letter to the Sisters of Providence asking if she could return and was welcomed back in 2017. She spent part of her canonical year as a novice in Holy Angels Province, Edmonton, Alberta, working with Sister Celia Chappell, novitiate director, while attending university and participating in ministries with elderly sisters and at a food bank. She returned to Seattle for her apostolic year with a focus on English language classes and ministry with immigrants and the poor.

Sister Marie-Thérèse is an active member of the Immigrant and Refugee Committee of Our Lady of Guadalupe Parish and previously volunteered with immigrants and refugees in Rome. Her empathy and compassion for this population is rooted in her own experiences as an immigrant, learning to navigate the language and customs of the various countries where she has lived for study and work, including Gabon, France, Switzerland and Italy. She is also involved in the St. Vincent de Paul Committee at the parish, which serves people experiencing poverty in West Seattle.

Sister Marie-Thérèse will spend three to six years living in community under temporary vows of poverty, chastity and obedience, and sharing in full-time ministry before making final vows.