Friday, May 4, more than 400 guests gathered at The Davenport Hotel in Spokane for the centennial gala of Catholic Charities of Spokane. At the event, Bishop Blase J. Cupich presented the Bishop’s Medal, the highest award the Diocese of Spokane can bestow, on the Sisters of Providence, Mother Joseph Province. In the past, he said, the award has been given to individuals and key contributors. This year, as Catholic Charities marked its centennial, the bishop said he wanted to give the medal to someone who has been an active participant in service to others for the past 100 years. 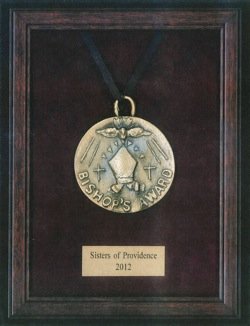 The Sisters of Providence have been serving “with grace and perseverance” in Spokane even before the diocese existed, since Mother Joseph and four other sisters opened a small hospital in Spokane on April 30, 1886. He described the Sisters of Providence as “tireless, spiritual leaders, models of compassion and of unconditional love,” and as “models of charity, service, collaboration and justice.” Bishop Cupich thanked the sisters for their service and for being “the steady rock on which Catholic Charities has been built.”

Provincial Superior Karin Dufault accepted the Bishop’s medal “on behalf of every single sister who ever served in the Spokane diocese, living and dead.” Provincial Councilors Judith Desmarais and Jo Ann Showalter were present at the event, along with several Spokane-area sisters. Look for more on this event in the summer issue of Caritas, which will be mailed June 21.