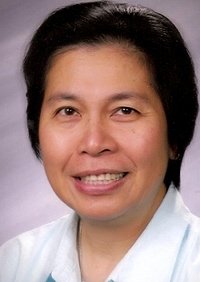 Sister Hilaria Suzette Bautista, a native of the Philippines, participated in a Eucharistic celebration of the canonical transfer of her perpetual vows in June in Spokane.

Sister Suzette is living in a Providence community in Portland.

She began a probationary transfer process into the Sisters of Providence in a simple ceremony in Yakima in June 2006 after 30 years of religious life as a member of the Sisters of St. Paul of Chartres, in the Philippines. She says she had been meditating and becoming acquainted with other religious communities, looking for something that was missing.

“A gift to our house”

“After sharing our life and mission with Sister Suzette for more than three years, we welcome her as a Sister of Providence,” says Provincial Superior/Leadership Team Coordinator Margaret Botch, SP. The sisters in her local community described her as “a gift to our house, and they, like the rest of us, support her in her desire to live the Providence way and to serve the poor with the support of other sisters.” Born in 1953 in Tuguegarao City, Cagayan, the Philippines, Sister Suzette entered the novitiate in 1975 and professed final vows in 1982.

Holds a doctorate in Education

She also took a one-year sabbatical to study theology and spirituality at Milltown Institute in Dublin, Ireland. In September 2005, Sister Suzette met with SP Vocation Team member Sister Clare Lentz and other sisters in Seattle, and then was invited to live with the community of Sisters of Providence in Yakima as she began her spiritual journey. Sister Alice St. Hilaire, of Yakima, has been director of her transfer process.

Sister Suzette initially volunteered at Casa Hogar in Hispanic ministry, and then became a volunteer at St. Joseph’s Parish before teaching religious education to third and fifth graders at St. Joseph School. She also worked at the Academic Skills Center at the Heritage University in Toppenish, Wash.

Makes baby caps and rosaries for the poor

While in Yakima, she joined the Spiritual Exercises in Everyday Life (SEEL) team as spiritual director, assisted in RCIA, sang in the church choir, and participated in faith sharing after Sunday Mass. Since then she has lived and ministered with Sisters of Providence in two other cities and is presently completing a unit in clinical pastoral education at St. Peter’s Hospital in Olympia, Wash., and then will move on to complete a CPE residency program at Providence Portland Medical Center.

In the evenings, while watching television, Sister Suzette is often busy with other outreach activities to benefit the poor, including making little baby caps and rosaries.