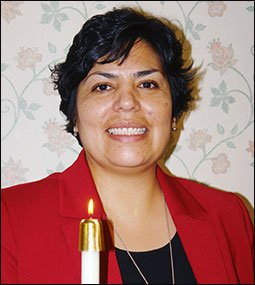 Two Sisters of Providence from Bernarda Morin Province in Chile professed perpetual vows in a liturgical celebration at St. Joseph Residence in Seattle on November 24.

Sisters Marcia Elizabeth Gatica Aguila and Marisol de las Mercedes Avila Pacheco first came to Mother Joseph Province for about three months on the way to Montreal for a 3 ½-month international formation experience in early 2011. They returned to Chile and it later was announced by the General Leadership Team in July 2011 that they would return to Mother Joseph Province to continue their formation and discernment while remaining members of Bernarda Morin Province.

Sister Marcia was born in the Patagonia, in the far south of Chile, and met the Sisters of Providence at their mission in Coyhaique. She entered the religious community in 2002. Her ministry in Chile had been serving as a campus minister while going to school in the evening to earn a psychology degree.

Sister Marisol, born in Linares, Chile, also entered the religious community in 2002. Prior to that, she had been a member of another religious community for 17 years. She met the Sisters of Providence while working in one of their schools in Chile, teaching history and religion, and later spent three years in parish ministry in Argentina. The two sisters were postulants and novices together. They renewed their temporary vows while attending the Religious Education Conference in Anaheim, Calif., in the spring of 2012.

The liturgical celebration and the reception that followed in November in Seattle were truly international, intercultural and intergenerational. Father Eric Watson, SJ, was the presider for the event at which Sister Alba Letelier, a General Council member from Montreal, gave the homily in English and Spanish. “This reign of God is not of this world, but it is for this world,” she said, describing the introduction of a “new way of loving and serving.” The prayers of the faithful were offered in English, Spanish, Tagalog and Vietnamese. Among the attendees was Sister Isabel Cid of Holy Angels Province in Edmonton, Alberta.

The Chilean sisters’ perpetual vows of chastity, poverty and obedience were received by General Superior Karin Dufault, SP. Part of the response of the community and the congregation was: “We promise you our prayers as you live out your vows and extend the Reign of God through compassionate caring and love for all. As you walk in the footsteps of Jesus, may blessed Emilie Gamelin, Mother Joseph and Mother Bernarda be your constant companions and support.”

“ … Our good God has spilled joy on this beautiful party. Thanks for what each one contributed to this celebration so it could be a celebration of the Community. I ask our provident God’s blessing on each and for all in the Providence Community … ”