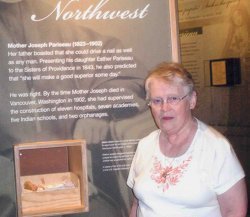 Sister Anna Marie Koval, of Spokane, had a chance last month to check out this traveling exhibit on the rich history and contributions of Catholic sisters in the United States. She and her sister Rose Schaefer, of Dayton, Ohio, viewed the exhibit created by the Leadership Conference of Women Religious (LCWR) when it was at the Cincinnati Museum Center.

Through photographs, artifacts and documents drawn from the archives of many organizations, including the Providence Archives, the exhibit tells how sisters played a vital role in shaping American life from before the earliest days of the republic and throughout its history.

Sister Anna Marie is pictured here in front of a large picture of Mother Joseph and one of the wax infants she made to represent the baby Jesus. “There is so much to see. I wish that there was more time to spend there,” she said.

She brought back a poster with pictures for the sisters to see at Mount St. Joseph. She also shared her favorite quote from the exhibit. Near the end of her long life, Mother Joseph, a Sister of Providence, mused: “we would do much good on a mission where there would be misery, and where it would be necessary to make sacrifices. Nowadays, we look for too much comfort in the land which offers so much.”

The exhibit’s continuing schedule is as follows:

The Women’s Museum: An Institute for the Future
Dallas, Texas
September 2009 – December 2009

Information on additional sites will be posted when available.