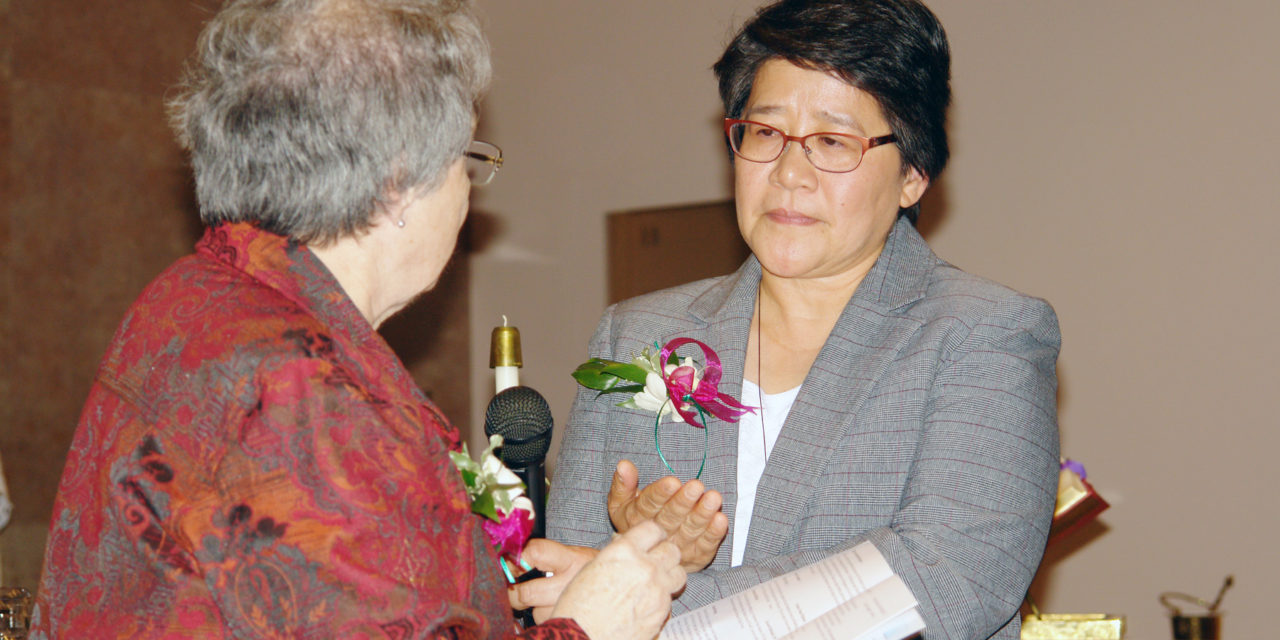 Sister Marita Nolasco Capili made profession of perpetual vows of poverty, chastity and obedience as a Sister of Providence in a liturgy on Sunday, March 24, 2019, in the chapel at Mount St. Joseph, Spokane, Wash.

Sister Marita entered the Sisters of Providence religious community as a novice on September 11, 2011. Her call to religious life came as a surprise to friends and family, but came clearly to her after several years on a corporate career path that left her feeling unfulfilled.

As one of eight children born to a poor family in the Philippines, Sister Marita moved with family members to Guam where she attended high school and college, earning an associate’s degree in hotel management.

For 13 years she worked for Hyatt International Hotels as a front-desk agent and then began advancing into higher-level positions at hotels in Chicago, Egypt, Saipan, Los Angeles and Seattle. Through it all – the 10-12 hour days and the world travel – she was restless. She eventually settled in Seattle as reservation manager then revenue manager for various Hyatt hotels.

Things changed after a trip to Haiti organized through her workplace where Marita spent time in service to children experiencing poverty. Later she recognized that was the beginning of God’s call to religious life.

Marita explored her calling through discussions with a pastor and conversations with Sisters of Providence who she had learned about in a national magazine for people considering religious life. After contacting the religious community, she embarked on a period of discernment that led to her request to become a candidate a year later.

As a candidate, she moved to Spokane and became involved in ministries as a volunteer at Women’s Hearth, at Ronald McDonald House and at Mount St. Joseph. She also participated in RCIA on Sundays. In 2014 Sister Marita began her mission in El Salvador as administrator of the youth Beca scholarship program.

The theme for Sister Marita’s perpetual vow ceremony was “Seek first the kingdom of God and His righteousness, and all these things will be added unto you.” (Matthew 6:33) The liturgy, celebrated by Father Stan Malnar, was followed by a reception. The event also coincided with the feast of Oscar Romero, saint and martyr of Central America where she has been on mission in El Salvador; celebration of the 175th anniversary of the congregation of Sisters of Providence; and her mother’s birthday.

“I have received so much love, grace, blessings, richness and support from God, the sisters, and the people we serve—how could I say no to the call of discipleship,” said Sister Marita. “Taking my perpetual vows is my expression of my full commitment to love and serve God as a Sister of Providence. It is a celebration of gratitude to God for the gift of my vocation, and for the support and prayers of my Sisters of Providence community, family and friends.”

“We are grateful to God for calling Sister Marita to the Sisters of Providence to share God’s love and compassion with those who are vulnerable and most in need,” said Provincial Superior Judith Desmarais, SP. “Already Sister Marita has combined practical experience from the corporate world with a passion for helping underserved youth to make a significant impact on the Salvadoran communities she serves.”

In lieu of gifts, Sister Marita requested that donations be made to the Sisters of Providence for the mission in El Salvador where she ministers to youth in a scholarship program. Nearly $3000 has been raised to date. Contributions can be made by check to Sisters of Providence, Provincial Administration, El Salvador Mission, 1801 Lind Ave. SW #9016, Renton, WA 98057-9016, or online at sistersofprovidence.net/support-us.