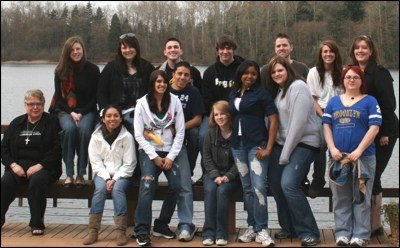 A group of 13 University of Great Falls students and two staff members dared to make a difference in the world over spring break in March. The students provided valuable service, built community, prayed and played together. Sister Karen Hawkins, SP, director of campus ministry (left), was responsible for planning and instituting the spring break service/mission trip to Seattle. Here’s just a sampling of the students’ week:

Sunday, March 7 — Participated in a prayer vigil in downtown Seattle to “Stop the Demand” in the trafficking of women, children and men, the second-highest industry of organized crime, surpassed only by drug trafficking. That evening the UGF group joined in a student-led Mass at Seattle University.

Monday, March 8 — Received an orientation to Providence Health & Services, including an invitation from Sister Susanne Hartung, chief mission integration officer for the Washington/Montana region, to consider pursuing an internship with PH&S.

Tuesday and Wednesday mornings, March 9-10 — Devoted their time to relief to earthquake-ravaged Haiti. At CHUMA, an international missions warehouse in Lacey, Wash., they cleaned and packed three 40 cubic-foot boxes of wheelchairs, crutches, walkers and canes; cleaned eight hospital beds; inventoried and packed four 40 cubic foot boxes of medical supplies with a total weight of 1,346 pounds; and sorted and packed 105 boxes of clothing, with a total weight of 1,876 pounds. The hard work was followed on Tuesday by an evening of stretching and doing yoga meditation to unwind.

Thursday, March 11 — Joined the developmentally challenged individuals of the L’arche community for fun and games. “The core members gave us a challenge in bowling, dancing, and realizing it is more important to enjoy the game than to win,” Sister Karen explains. “We won some, but lost most games with grace. We shared pizza together and enjoyed a Sounders game courtesy of the L’arche community.”

Another special activity was making sandwiches to offer the homeless along with kind words. “One student reported that a man told her this was “the best gift he received,” Sister Karen explains. “The gratitude amazed the student.”

In between their good works, the UGF students visited Seattle’s aquarium and zoo, which offered alternative times of learning and fun, Sister Karen adds. Providence of God, we thank you for all.