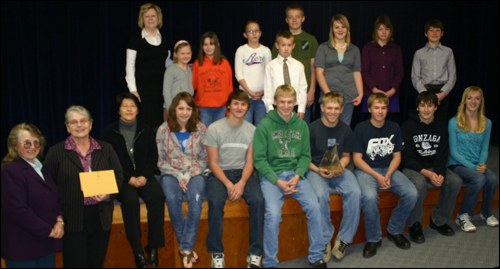 Sisters of Providence traveled 115 miles, from Spokane to Pomeroy, Wash., on Palm Sunday, March 28, to thank a dozen schoolchildren in Holy Rosary Parish for their donation of $2,030 to help children in earthquake ravaged Haiti.

With the sisters’ help, the children will achieve their goal of raising funds that are put directly into the hands of Sisters of Providence working with Haitian children, not through a giant relief agency. Their funds, letters and photos will reach their intended recipients by way of Spokane and Renton, Wash., Montreal, Quebec, and Port-au-Prince, Haiti.

The idea for the children’s fund drive was born two days after the 7.0 earthquake on January 12 that killed 230,000 people. Holy Rosary parishioner Connie Harris was watching television and “saw all of the sad little faces of the children in Haiti. I was overcome with worry and grief for the children,” Harris said. Not an hour later, she saw that the Sisters of Providence work with children in Haiti. “I felt that it was a sign of how we could respond to the tragedy.”

The eleven Sisters of Providence serving in ministry in Haiti survived the earthquake, but their residences were damaged. Those sisters are from Emilie Gamelin Province, based in Montreal, Quebec. Another Sister of Providence, Sister Marie-Claire Soucy from Mother Joseph Province, based in Renton, Wash., volunteers at a rural hospital to the north in an area that was not as severely impacted.

Harris came up with the idea to involve Catholic religious education (CCD) students in raising money to send to help children in Haiti through the Sisters of Providence. The notion quickly caught on with Mary Flerchinger, Holy Rosary Parish director of religious education. Originally, Harris had proposed the fund drive as a junior high project to go along with the students’ studies on the “corporal works of mercy.” Flerchinger and Father Bob Turner, parish priest, instead suggested involving children of all ages and holding off until Lent, when they would be working on the beatitudes.

Because Holy Rosary is a small parish with relatively few children — six in the primary grades and six in junior high — the initial goal for the project was set at $500, Flerchinger said. Second graders made a poster and found a bank to take the collections. Junior high students made posters for a presentation to the parish that would be joined in by third-,  fourth-,  and fifth-graders. Donations trickled in immediately, with nearly $400 collected in the first two weeks.

The parish presentation on March 7, with children sharing about their posters, led to a collection of another $400 that morning, Flerchinger said. Already the students had more than doubled their goal. “In the following week, donations kept coming in and we are up to $2,030” Flerchinger reported on Palm Sunday. “We are very happy with the response.”

Provincial Councilor Jo Ann Showalter, SP, and Marita Capili, a candidate for the religious community who spent time as a volunteer in a Haitian orphanage, spoke to the children and other parishioners during the announcement portion of the Palm Sunday Mass. They also met with and thanked the children after Mass. Members of the Provincial Council will travel from their headquarters in Renton, Wash., to the Sisters of Providence International Centre in Montreal for a conference in mid-April. They will hand-deliver the donation and the children’s letters and photos to the leadership of Emilie Gamelin Province, who will see that the Pomeroy children’s collection gets to the sisters working with children in Haiti. The sisters also will deliver the proceeds from their own collections for the international congregation’s rebuilding fund in Haiti.

Flerchinger and Harris agree that what made the project take off with the children of Holy Rosary Parish was the opportunity to actually contact the Sisters of Providence in the West and send the money directly to sisters working with children in Haiti. “This is really the first time that our children have had a chance to participate in such a project,” Harris explained. “As a girl in Ireland, we always had projects for the poor going on. I wanted our children to experience the same excitement that I did seeing the result of those projects.

“I hope that this will be the start of many projects that our children will be involved in. Maybe it will encourage the CCD classes at other parishes to get involved when they see what we have accomplished.”