Here are the top 10 reasons why Mother Joseph of the Sacred Heart, a Sister of Providence, was memorialized in 1977 in Statuary Hall in the U.S. Capitol and why she should remain there. 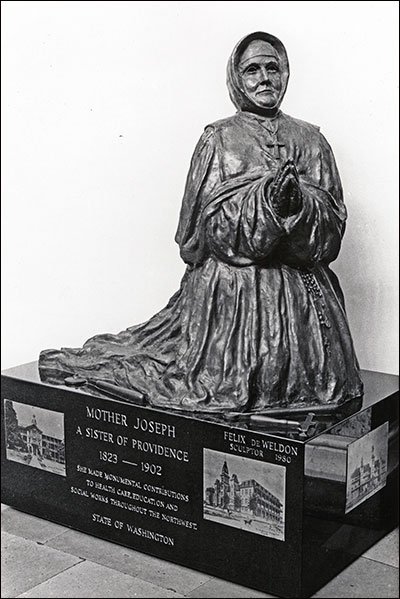 10) This woman of extraordinary compassion, creativity, skill, vision and deep faith came to the West in 1856 with four other sisters with a clear mission: to fill the unmet needs of God’s people on the frontier.

9) For the next 46 years, she provided the leadership that led to the opening of more than 30 hospitals, schools and homes – many first in their region and still in operation – to care for the sick, children, orphans, the elderly and the mentally ill in Washington and surrounding states.

8) Recognized as one of the first architects in the Northwest, Mother Joseph designed and built many of these ministries, including the landmark historic structure, Providence Academy in Vancouver, Wash.

7) The roll call of Washington cities where she made her mark is impressive, including Vancouver, Olympia, Seattle, Spokane, Walla Walla, Port Townsend, Yakima, Tulalip, Colville, Sprague, Colfax, Cowlitz and Steilacoom.

6) She dealt with the ever-present need for finances by conducting arduous begging tours to mines and lumber camps.

5) The corporation she established in 1859 is recognized as a pioneer corporation in Washington State and has developed into Providence Health & Services, serving the health-care, social service and education needs of people in Washington, Alaska, California, Oregon and Montana.

4) Her story of courage, perseverance and accomplishment continues to resonate with young people, including the group of students in Vancouver, Wash., who successfully lobbied the Washington State Legislature in 1999 to declare her birthday, April 16, as a state holiday.

3) The process to select Mother Joseph was spearheaded by community individuals, not high-powered politicians. In fact, after Governor Dixie Lee Ray authorized the action, the process of making it a reality was enthusiastically supported by others who might one day be considered for the honor, including Warren Magnuson and Henry Jackson.

2) Governor Ray expressed why this woman is so significant, noting that Mother Joseph used her talents “to create and to build where others before her had not … She liked to see things accomplished. She liked to see that decisions were made and not just studied to death.”