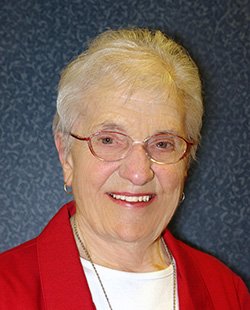 In 20 years as a senior citizen living with novices in Spokane, Sister Liz Gress demonstrated the patience and wisdom to teach them, and the openness and humility to learn from them.  The friendships formed are lifelong.

Born in White Bluffs, Washington, she was 4 months old when her father died of pneumonia.  An aunt and uncle took her to live with them in Richland, while her sister Margaret, one year older, remained with their mother.  When Liz was 12, both households moved to Grandview, Washington. In later years, the bond with Margaret and her family grew much closer.

Liz first met the Sisters of Providence at St. Joseph Academy in Sprague, Washington. She visited Mount St. Vincent in Seattle for a yearbook workshop and returned after graduation to enter as a postulant in 1946.  She made profession in 1948.

Her first ministry was a kindergarten classroom at St. Gerard Grade School in Great Falls, Montana, with no teaching preparation and in a room with impossible distractions like a slide and climbing toys.  “I had a hard time that first year,” Sister Liz recalled.  “My blessing was Sister Virginia Cosner, an excellent teacher, as my supervisor.”

Sister Rose Angela, another good teacher but with a different style, was her supervisor the following year. Most of her teaching career and other ministries have been in Montana except for six years at Maryville Academy in Des Plaines, Illinois, outside Chicago, from 1956 to 1961.   Students there needed academic instruction as well as nurturing and emotional support.  “I was in charge and seasoned then,” Sister Liz said.

She earned college degrees from the College of Great Falls and the University of Notre Dame.  She was principal of St. Peter and Paul School in Great Falls and spent six years as admissions counselor at the College of Great Falls, followed by two years at Mount St Joseph in Spokane in service to retired sisters. After a theology program at Seattle University, she served St. Luke Parish in Great Falls before moving to Spokane in 1992 as a member of the St. Ignatius Province leadership team. After two decades at the Novitiate House she moved to Emilie Court in Spokane in 2016.

She has been a volunteer at Our Place ministry in Spokane’s West Central neighborhood, a board member at St. Joseph Hospital in Polson, Montana, and currently volunteers at Providence Sacred Heart Medical Center. She enjoys nature, especially mountains and water, and loves gardening, trying new recipes, taking walks and time for prayer.

Sister Liz has a lot of gratitude for the opportunities and the friends she has made, and especially for her health.  “I ask God to bless all those who supported me during these past 70 years. Providence of God, I thank you for all!”

“I ask God to bless all those who supported me during these past 70 years.

“Providence of God, I thank you for all!”