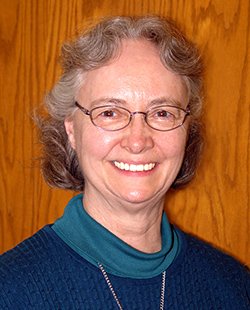 Sister Celia Chappell was among the first postulants who did not wear black. Blue, tan and green calf-length A-line skirts and jumper tops and a little veil was her uniform until she donned the modified habit as a novice. And the changing times allowed her something unheard of: a 10-day home visit documented in The Providence Sister in a two-page spread.

“It was a photo opp about vocations,” Sister Celia said. “I was the closest one to home and my mother welcomed the photographer who took lots of pictures of me with my baby brother, my younger brother and sisters, and their little dog.”

The times were definitely changing.

Celia, born in Seattle in 1948, was the fourth girl in a family with seven girls and two boys.  Born to parents from Montana, they lived in White Center, near Holy Family Catholic Church.  Their father, Wesley Chappell, was raised Methodist and when he married Cecelia Elizabeth “Betty” Quinn, he committed to raising his children as Catholics, like their mother.  The family moved to the Fauntleroy area in West Seattle when Celia was 3, to a home two and a half blocks off Puget Sound.

Celia attended Holy Family Catholic School and was taught by Sisters of Providence. The post-war baby boom meant crowded classrooms of 50 students with a single teacher, with two classrooms for every grade.

“The sisters made an impression,” Sister Celia said, especially Sister Rose Byrne, then called Sister Kevin, her fifth-grade teacher known as a disciplinarian.  “She fell in love with us and took care of us like family,” subdividing the group to pair strong students with weak ones. “We’re all going to get through this together,” Sister Kevin said. “Sister Kevin is where the beginning of my vocation came from,” Sister Celia explained. “I saw her constant care, and I saw it in the other sisters, too. My sister Lynn entered the Sisters of Providence when I was 12, so I came to know many more of the sisters,” Sister Celia said.  “I wanted to be with the sisters and help people.”

After high school graduation she entered the Sisters of Providence. She professed first vows in 1970 at Mount St. Vincent, Seattle, and final vows in 1978 at St. Anne Parish, Seattle. Growing up, she was called Jo by her family, however, upon entering she was initially called Sister Celia. Later, for about 10 years, she asked to be called Sister Jo, and then returned to being called Sister Celia.

After graduating from Seattle University with an education degree in 1970, she taught math for three years at Providence High School in Burbank, California, until she was slowed by health issues.  After recuperating, she became a parish visitor, helping several senior Sisters of Providence with beginning outreach to the elderly at Holy Rosary Parish, Seattle.  She served an internship in the social service department at Providence Portland Medical Center. Next, she was a minister to senior adults at St. Anne Parish, Seattle.  After receiving a master’s degree in social work at the University of Denver, she worked in parish social ministry at Catholic Community Services, Seattle, helping to start volunteer chore ministry throughout the parishes of King County.

Sister Celia was vocation director from 1985 to 1991.  Next, she became a spiritual director with Spiritual Exercises in Everyday Life (SEEL), headquartered at St. Joseph Parish, Seattle.  She loved working with the people and assisting with the training of new spiritual directors for the SEEL Retreat. In 1999, she joined the staff of the Ignatian Resource Center, later becoming its interim director for two years.

Asked what was her “favorite ministry,” Sister Celia said, “Every time I have been put in a place where I can help people has been good.”

From 2003 to 2012, Sister Celia had the privilege of living with and supporting her mother Betty in the last years of her life.  Betty Chappell died at the age of 90 in West Seattle in September 2012.

Sister Celia began 2013 by filling the remaining two years of a term as provincial councilor for Mother Joseph Province.  “It was a great gift to give that kind of service,” she said. She was chosen as novitiate director for Holy Angels and Mother Joseph provinces for a three-year term beginning in August 2014 and recently was appointed to a second term ending in July 2020.

“I have great gratitude for our sisters who have been so supportive to me throughout my life. That’s the beauty of community,” she said. “If you sit with five of us, you’ll get seven conflicting opinions, and two of them belong to the same person,” she said with a smile.  “But we can all get along and we love each other.”

“That’s the beauty of community; If you sit with five of us, you’ll get five conflicting opinions, and two of them belong to the same person.

“But we can all get along and we love each other.”