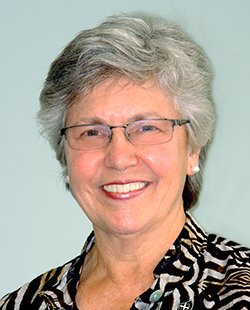 Sister Joan Gallagher was born into an Irish/Swiss Catholic family with nine children in Tacoma, Wash., and grew up in Puyallup, Wash. She attended All Saints School, where she was taught by the Benedictine Sisters of St. Placid, Lacey, Wash., and at St. Leo’s High School in Tacoma, taught by the Franciscans.

A weekend vocation retreat with the Benedictine Sisters was a turning point. After graduation in 1966, she entered the Benedictines, a teaching community, and took the name Sister Denise.

She was a student teacher at Holy Rosary grade school in Tacoma and earned degrees in education, home economics and library science. For six years she taught high school at St. Placid in Lacey, while also doing high school and confirmation retreats.

She was offered and allowed to accept an opportunity to serve as youth minister in All Saints, her home parish.

She became vocation director for the Benedictines after final vows and began to feel that she was called to a more active religious community. She began a three-year transfer process in June 1982, meanwhile taking a job at St. Jude’s in Redmond, Wash., as youth minister and a pastoral associate.

Her transfer of vows to the Sisters of Providence was completed in July 1985. Her ministries since then have included being a pastoral associate at St. Mary’s in Aberdeen, Wash., and at St. Therese Church and Our Lady of Fatima Church, both in Seattle. She also was librarian at St. Vincent de Paul School, Federal Way, Wash. She served on the vocation and formation committees and in 1994 began her first three-year term as vocation director, continuing in that role until 2004.

After serving as director of the religious community libraries and doing spiritual direction, she returned to vocation ministry from 2010 to 2013.

Today, Sister Joan is a member of the Leadership Team of Mother Joseph Province with a term ending in 2019.

Today, Sister Joan is a member of the Leadership Team of Mother Joseph Province with a term ending in 2019..