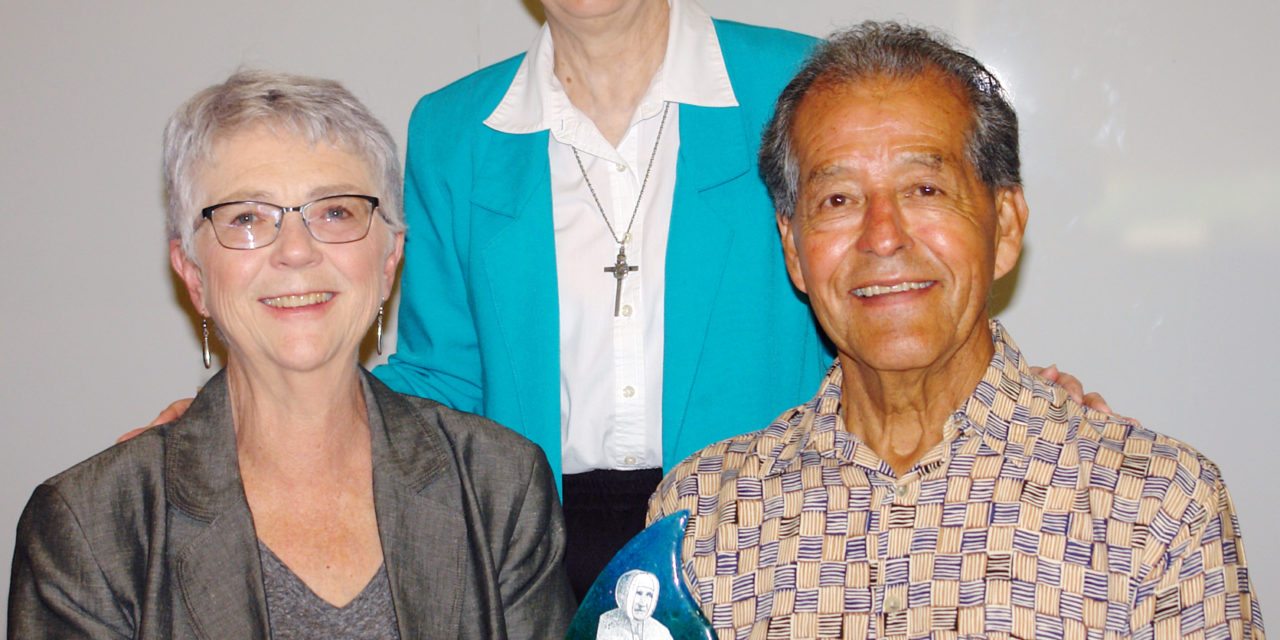 Jacobo “Jake” Saldaña, a long-time volunteer and resident of West Seattle, was awarded the 2019 Mother Joseph Award by the Sisters of Providence in a ceremony at Our Lady of Guadalupe parish following morning Mass, June 6, 2019.

The Mother Joseph Award is given annually to a person who exemplifies the values and courage of Mother Joseph, the first provincial leader of the Sisters of Providence in the western U.S. More than 100 nominations were submitted for this year’s award.

It is easy to recognize the spirit of Mother Joseph in Jake. With tenacity and grit he overcame extraordinary odds as a young immigrant, worked tirelessly to build a career and provide for his family, then retired and began working in service to the poor, vulnerable and underserved members of his community.

For more than 15 years, Jake has been going above and beyond as a volunteer in West Seattle at Our Lady of Guadalupe parish, the Guadalupe Conference of St. Vincent de Paul Society, Providence Mount St. Vincent, and prior to that, Catholic Community Services. (He was even a West Seattle Pee Wee Baseball volunteer coach for 15 years when his children were younger.)

Jake said he is driven to give as much as he can to people in need. He understands what it is like to live in poverty and on the margins of society because he has experienced this first-hand. Born in Mexico, his father died shortly after Jake was born. Following this tragedy, his pregnant 19-year-old mother took her four young children 300 miles from Linares, Mexico, to Texas in hopes of giving her a chance for a better job and her children a chance for a better future.

Jake’s mother and the older children worked for ranchers picking cotton, lettuce, tomatoes and carrots. Jake grew up working in the fields and attending school, but food was scarce and life was rough. He didn’t even have a pair of shoes until he was a teen.

Jake’s family had their first deportation experience when he was about 7. He remembers clearly the big Greyhound bus that came for them and transported them back to Mexico with only what they were able to grab quickly before they left. But Jake’s mother was determined to give her children a better life and put their paperwork in order to become legalized.

In 1955 a rancher they had worked for became their sponsor and Jake’s family members became U.S. citizens, making their home in Texas.

In 1957 at age 14, Jake had become a self-described rebel and daredevil, and had been kicked out of school. Amidst this, Jake felt called to change. He recognized the need to find a better path so he set out to “follow the crops” to earn a living, moving from the South, to the Midwest, to the West learning tough life lessons along the way.

Jake settled in Seattle in 1964 and spent 35 years at a glass factory where he worked his way up from janitor to mechanic to machinist, including a stint as vice president of the union. He broke down barriers as the only Mexican-American in the plant at that time and advocated for fair treatment for all.

At the same time, Jake and his wife were raising six children and were known to open their home to nieces and nephews, international visitors and others in need of housing, as well.

Jake didn’t plan to retired in 2003 at age 59, but he had been diagnosed with prostate cancer and urged by his doctor to reduce the stress in his life. He made a full recovery and decided it was time to focus on helping others.

Jake was already an active volunteer at Our Lady of Guadalupe parish and the Guadalupe Conference of St. Vincent de Paul Society in West Seattle. So, it wasn’t a surprise that Jake responded to the church bulletin’s call for volunteers to help with the Catholic Community Services (CCS) Chore Ministry, driving people for errands and appointments. After several years with CCS, Jake began to volunteer at Providence Mount St. Vincent, a senior living community in the West Seattle neighborhood, where he is part of the spiritual care team, helping escort residents to Mass each week and serving as Eucharistic minister.

“When you visit a person, all you gotta do is make them feel good,” said Jake. But to the people he serves, Jake’s kindness and compassion are priceless.

Storey Squires, the volunteer director at Mount St. Vincent, said, “Jake believes he is blessed to serve, and believes God works through him every day. We feel this blessing in his servant leadership, and how happy we are to have his amazing service.”

When Jake is not volunteering in his community, he enjoys spending time with his wife Norene, his five sons, daughter and four grandkids—not to mention the various house guests, backyard chickens, etc.

Jake is grateful for the way his life has unfolded, in spite of the challenges. “God has given me an opportunity to slow down and really look at my life from the beginning to where I’m at now,” he said. “Some life struggles were harder than others. Mine paved the way for me to become the kind of person that gives back to the community.”

Editor’s note:
Mother Joseph was a distinctive figure of early Northwest history, a woman of extraordinary compassion and vision. When Mother Joseph first arrived in the Washington Territory in 1856, she encountered a strange new world of physical hardships, cultural and religious diversity, and rapid change. There were no hospitals, few schools, and little in the way of charitable services for those suffering the misfortunes of life on the frontier.

Equipped with simple tools, enormous gifts for creating and building, and deep faith in Divine Providence, Mother Joseph and her sister companions stepped into the breach to fill these unmet needs. Under her leadership, more than 30 hospitals, schools and homes were opened for orphans, the elderly and the sick in Washington, Oregon, Idaho, Montana and southern British Columbia.