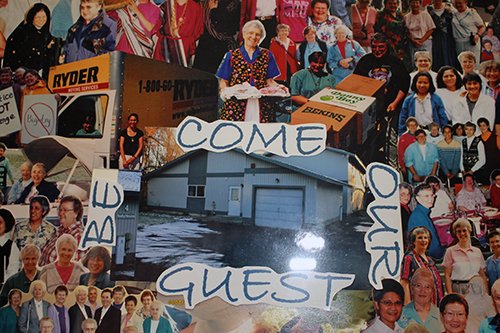 Early this summer, Sister Elizabeth “Liz” Gress packed her bags and moved out of the Sisters of Providence novitiate that has been her home for the last two decades. No, she is not a novice who failed to launch. Sister Liz is an 80-year-old who has spent the last 20 years living with, nurturing and loving the religious community’s newest members.

The novitiate, for St. Ignatius, Sacred Heart and Holy Angels provinces, moved to Nally House on property in Spokane owned by the Franciscan Sisters of Philadelphia in June of 1996. As Sister Liz tells it, Sister Margaret Botch convinced Sister Eileen Croghan, then provincial superior, to let the group of sisters living in the Contemplative House – Sisters Margaret, Judy George, Kitsy Rutan and Clare Lentz — give it a try. “It was like (the movie) ‘Yours, Mine and Ours’; Sister Eileen and I were in an apartment and Sister Teresa White came as novitiate director. Blanca Sagles was just beginning the novitiate. We were a large group.”

The location turned out to be perfect: lots of bedrooms and bathrooms and all on two floors, surrounded by a property that was like a large garden. On top of that, it was a short walk from St. Aloysius Parish

It was a blessing, Sister Liz said, that the initial sisters were similar in age and training. Together, they established a formal routine for life in the novitiate. She chuckles when she is asked how life in the novitiate today compares with her experience when she entered the religious community. “In my time in the novitiate, there were no budgets and we didn’t go anyplace,” she recalled. Then the new sisters lived on the fourth floor of Mount St. Vincent in Seattle, looking out the windows at the Seattle skyline. Her opportunities to get out came when she accompanied a sister who went to help the poor. “Now, the novices drive and they spend money,” Sister Liz said.

The last 20 years have been a blessed time for her. Novices and novitiate directors have come and gone, but Sister Liz has been a constant presence. Originally, her ministry was with Our Place, a ministry serving the West Central neighborhood in Spokane, and later she transitioned to volunteer work at Providence Sacred Heart Medical Center, which gave her more time at home. Sister Liz took special joy in knowing new members of the community from the start, in the youthful energy in the novitiate house, and in the celebration of different cultures. “Nally House is the epitome of the ‘3 Is’ that describe the religious community”: international, intergenerational and intercultural.

Each day has been life giving, she said. “One of the joys that I appreciate is getting to know the new members early in their formation journey and to watch them grow in their dedication to God and community life. It has helped me to grow, too.

“The novices kind of guided me, always helping me,” she explained. “I cooked, cleaned and provided a stable routine,” giving special care to provide prayer time and meaningful table conversation at meals.

“The spiritual life of the community is a priority in the novitiate, supported by daily Prayer of the Church, Mass, retreats, goal setting and community meetings.” And in the early years at the novitiate, she took new sisters on trips to places like Monarch, Glacier Park and St. Ignatius, Mont. – “wonderful times.”

Of course, it wasn’t all fun. There were challenges that are always inherent in individuals living together. “Different personalities, ways of doing things and values kept things interesting,” Sister Liz said. Compromise often saved the day. “I like things clean and orderly,” she admitted, “and sometimes I had to let go, lots of times through prayer. It wasn’t easy.”

The learning was give and take. Sister Liz taught the new sisters how to live an orderly, communal life, sharing and contributing. “I was stable; there most of the time,” she said. “I knew what was where and what to do when.” The novices taught her new ways to communicate. “Twenty years ago, there was no computer,” Sister Liz explained. “Now they have the cell phone, the iPad, the computer … With their help, little by little I got acquainted with those things.”

In  awe of young women

What Sister Liz did not learn were the languages. “At first the sisters from El Salvador spoke only Spanish, but we kind of communicated anyway.” She had studied Spanish in the past, but her Spanish language skills went away when the opportunities to speak it did. “When I was little, all my relatives were from Germany except my sister and me,” Sister Liz recalled. At the age of 6, she was taken to Germany to meet her grandparents and returned home unable to speak English. Later, she lost her German language skills.

She said she is in awe of how talented and smart these young women are. “They will be good future leaders in the community.”

Now that she has moved to Emilie Court, where eight other retired sisters in Spokane live, she is looking forward to the next phase of her life. “I don’t miss anything really now,” she explained. “People are not the same at this age, not in the best health,” she said. “I didn’t feel like moving to a small house and helping with the cooking and cleaning. I still drive, but I tire more easily.” Still, she continues her love of taking morning walks, using hiking sticks for stability.

“The only thing I will miss is being out of the circle of formation, knowing what’s going on with the new sisters,” she added. She takes with her fond memories – and photographs – of trips, birthday parties, celebrations and the smiling faces of the novices she has lived with over the years.