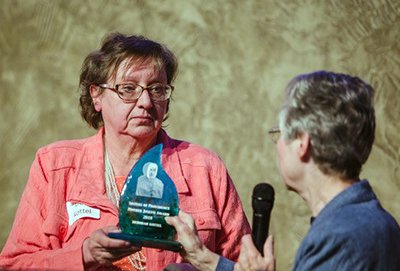 As a child, Deborah Kottel’s favorite question was, “Why?” As an adult, her response has been, “What can I do to change things?” Her actions seeking justice for people who are poor and vulnerable has earned her the 2018 Mother Joseph Award from the Sisters of Providence.

Deborah is best known as an attorney and a professor of law for nearly 30 years at the University of Providence (formerly the University of Great Falls), and coordinator of the online paralegal program. She has been chair of the faculty, faculty representative to the board of trustees, and a leader of various faculty governance committees. She also was a member of the Montana House of Representatives for four terms, as well as Commissioner of Transportation for the state. However, it is the impact she has made on her community that inspired Sisters Lucille Dean and Mary Hawkins to nominate her for the annual award given to a person who “exemplifies the values and courage of Mother Joseph.”

“Whether in her dealings with the university students, in her commitment to the St. Vincent de Paul Society, or in her attempts to assist citizens in making use of their voice and rights, Deb is relentless,” Sister Mary and Sister Lucille wrote. “She is a leader, and she also knows how to build teams of collaborators.”

The competition was stiff, says Provincial Councilor Jo Ann Showalter, thanking the people who nominated more than 80 individuals for this year’s award, a record number. It was Deborah’s ability to see a problem, to envision a solution and then to enlist others to mobilize to make a difference that stood out. Because of her efforts, Camp SkyChild exists to support children with an imprisoned parent, homeless veterans have a roof over their heads in an old monastery converted into a home, and the St. Vincent de Paul offers not only meals but also classes on applying for low-interest loans and how to pay off the loans and build their credit.

Deborah was born in Gary, Indiana, and grew up in Chicago, blessed with the good fortune of having a “traditional family.” Her parents, a mother who was a nurse and a father who was an engineer, were supportive of her and a brother born on her fifth birthday. “I was Catholic and went to parochial school, and I had lots of activities in a community where the assumption was that I would go to college,” Deborah recalled. After graduating high school, she enrolled at Eastern Illinois University and then quickly transferred to Loyola University in Chicago.

Her drive and focus were very apparent. As an undergrad, she went to school full time while working 40 hours each weekend as a nurse’s aide in Loyola Hospital, which had a free-tuition program for employees. Her degree was in psychology with a second major in urban ethnic studies. “I don’t have a clue why; it was the ‘70s,” she explained. “I loved sociology because it brought things to the forefront, the inequity all around us, and I wanted to know why we treated each other that way.”

After graduation, she headed to Roosevelt University and grad school for clinical psychology. She was serving an internship at the state mental hospital when the U.S. Supreme Court ruled on a lawsuit demanding that the mentally ill receive the “least restrictive alternative” to institutionalization. Deborah was dealing with people with a minimum of 10 years of hospitalization who were going to be released. “It was my job to see if they could adapt on the street, and it was a rude awakening,” she said. She could work with the patients, but saw clearly that they could not make it on the streets because they would be taken advantage of, victimized and discriminated against. “I had a lot of anger. I wanted to sue people; to make the bad people accountable,” Deborah said. She decided to enroll in law school and received scholarships to attend DePaul College of Law in Chicago.

After post-graduate work at Northwestern University, Deborah worked 11 years for a corporate law firm representing banks and municipalities and doing labor law. “I wanted to put a ballpoint pen through the eyes of many of my clients because they weren’t helping people,” she said jokingly. Eventually, she owned her own law firm, but “came to a point where I had to decide what I really wanted to do in life,” Deborah said. While serving a one-year visiting professorship in North Carolina, she happened upon an advertisement for a position for a law professor at the University of Great Falls, was offered the job and took it, intending to stay for a year. That was 30 years ago.

“It was the sisters,” she said of her decision to stay. “They were on campus then and it felt like home because of the mission of helping students.” In those days, classes were being taught by teleconference up into the Arctic Circle and in the prison system. “The night program was strong, with people who came to education later in life. I loved facilitating their learning.”

One of those students was a woman living on a park bench with her two children. She had gotten financial aid and later earned an undergraduate degree in paralegal studies, and then a job. “She said she couldn’t believe in her life that she would go from there to a job that she loved, and a good life not just for her, but for her children. How is that not the best thing in the world?” Deborah said of her job at the university.

She had been on campus for two years when she taught a sociology class on women and crime and asked her students to create programs to reduce recidivism. Children were the victims of their parents’ crime, directly but also when the family was torn apart, she explained. Having a father in prison was “a deep, dark, dirty little secret. We don’t talk about it. Some of the students came up with the idea of camps for kids to break the prison cycle, and it was brilliant!”

That is how Camp SkyChild was born. Deborah, who had never run a camp before, raised about $500. “A good beggar,” she talked her way into using the St. Thomas campground for free, borrowed a bus from a Catholic school, and got food from the food bank. “There were 80 kids the first year,” she reminisced, and because no age limit had been set, someone dropped off a baby in order to have a child-free day. I did all the cooking with a 6-month-old baby on my hip.”

Today, Deborah raises money and writes grants for Camp SkyChild, now in its 25th year. It has a set program, a cook, and student volunteers to run it in partnership with St. Vincent dePaul. This year’s camp, August 5-10, will have 60 children. For 10 years Deborah also ran Camp House, a camp for women and children with a background of domestic violence. Children enjoyed the outdoors while their mothers took classes on self-esteem and resume writing, and then joined them for evening activities.

A grant to the university from the Montana Board of Crime Control in 2002 aimed at breaking the circle of prison recidivism enabled students to do activities with children beyond the week at camp. Deborah’s favorite was taking little girls in fancy dresses from St. Vincent DePaul to order dinner from a restaurant menu and then go to “The Nutcracker” ballet. “I think it was a glorious experience,” she recalled. “I wanted them to see so much of what is out there; a way to spend their lives that doesn’t involve drugs and alcohol.” Another favorite was videotaping inmates dressed as Santa as they read “The Night Before Christmas,” and then mailing the videos to their families.

Deborah, who is divorced, has an adult son she happily describes as “a good man, a great father of two girls and a great husband to his wife.” Employed at a steel company, he volunteers at the camp and built a bike rack for the veterans’ home that Deborah envisioned while working with St. Vincent DePaul board members. When she learned that they had no transitional housing, she had a mission. Through strategic planning with the board of the Gateway Center for treatment-addiction, she was able to finagle an old rectory being donated to St. Vincent DePaul for just $1. Today it is a homeless shelter for veterans called Grace Home, named after Sister Grace Sullivan, who served in ministry at St. Thomas Home. The project came together through donations and volunteer hours, and each uniquely designed room has a sponsor. The 14-bed facility was full three weeks after it opened and it keeps a waiting list.

“This is something the sisters understand, that people need permanent, supportive housing,” Deborah said. “The men who live here have breathing space and are finding employment. They do wonderfully with us, living in community and having a place when life falls apart. They have family to share meals with, to talk the day over with, and to have support.” Of course, not all of them are successes; some are asked to leave or leave voluntarily.

Collaboration is key to her accomplishments

“Collaboration is what it’s taken to get things done. There’s always a group. None of it could have been done without hundreds of hands assisting,” Deborah said. Collaboration between sisters and lay people has always been key to the success of the ministries of the Sisters of Providence, including Mother Joseph, whom Deborah first learned of when she came to Great Falls 30 years ago. Deborah is honored by the award, but a bit embarrassed. “They could just send me an email and say thanks,” she said, but she appreciates that the presentation helps keep the story of Mother Joseph and the sisters alive.

“I love the history of the sisters,” she said. “Since the sisters left the campus, fewer people tell their story. You can have a mission statements, but we learn best by the stories.” One she loves to tell is of James Parker Shield, a Native American whose life was changed by Sister Providencia Tolan. Deborah said the sister demanded to know what this high school graduate was doing with his life and then marched James into a bank and told the president to get out a checkbook and pay for him to go to college.

Today James, operating out of an office space at St. Vincent DePaul that Deborah arranged, has obtained a grant to create the first Native American Hall of Fame, to be located in Arizona. James was one of the attendees when the Sisters of Providence presented the Mother Joseph Award to Deborah on May 3 at the university’s Annual Board, Faculty and Staff Dinner at the Best Western Heritage Inn as part of commencement week.