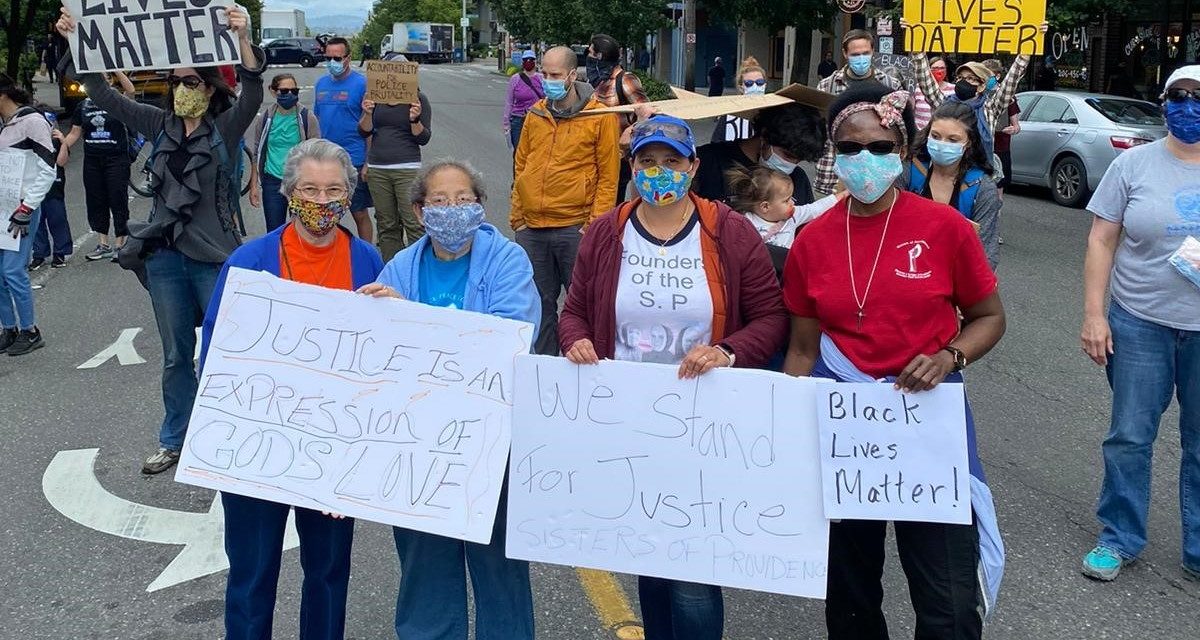 These were some of the chants that could be heard in the upswell of the demonstration in West Seattle by several Sisters of Providence who took to the streets on June 6, 2020. They joined people of all ages and races, forming a crowd of thousands, who came together in a peaceful protest to support Black Lives Matter, racial equity and an end to police violence.

Sisters Margarita Hernandez, Karen Hawkins, Marie-Thérèse Gnamazo, Beatrice LaFramboise and Judith Desmarais listened in the rain as speakers raised their voices, shared their stories and called for change. In moments of intense solidarity, the sisters joined other protesters in kneeling, lying face down in the streets, and holding their breath in memory of George Floyd who was killed by a police officer in Minneapolis on May 25.

It was a day of powerful experiences, profound compassion and opportunities for reflection.

“What struck me was the diversity of the crowd and the vast numbers,” said Sister Karen. “I was moved by a young person who thanked me for coming. And I was touched when speakers talked of their individual experiences of prejudice and being treated unfairly.” The event had even deeper significance for Sister Karen, as she recalled the pain of a friend who lost her father when police restrained him with a fatal choke hold years prior.

Sister Margarita was impressed by the engagement of the people in attendance – children, adults, grandparents, youth – all were taking part. But it was the actions that were most memorable. “As I kneeled I prayed not only for George but for all people suffering injustices — Black people and my people, Latinos,” she said. “It is hard to explain the feelings I had when I laid down on the pavement with the other people, feeling the heat of the cement and the rocks in my belly. It was so powerful.”

For Sister Marie-Thérèse, there was no question that she needed to be there, even though joining a large crowd in the middle of the pandemic gave her concern for the older members of her household. She felt called to lend her voice and her prayers and knew in her heart that God Providence would be there. “We are all brothers and sisters. God created us to be different. The color of our skin means nothing; the color of our blood is all the same,” she said. “Racism is a very bad sickness, and we need healing. We need peace so justice can be done.”