Home to Spokane sisters since 1951

“I’ve heard there used to be sisters here.” 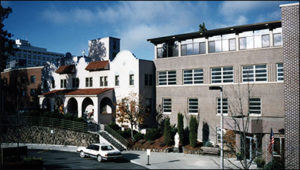 The original 1932 building at center; Providence Sacred Heart Medical Center is just visible in the background.

When a Sister of Providence heard that remark on an elevator at Mount St. Joseph in Spokane, she was surprised, bemused and nostalgic. Yes, there used to be a great many Sisters of Providence in the building on Ninth Avenue whose sale to Providence Health & Services-Washington took effect on January 15. If these old walls could only talk …

If you are old-school Spokane, you may remember that the site of Mount St. Joseph, where east meets west on Ninth Avenue, is the site of the original Rockwood Clinic built in 1932 by Dr. William W. Robinson. On that spot, he also built his private home and later a wing that expanded the clinic. Sacred Heart Hospital purchased the buildings and surrounding property in 1941. It initially was home to the School of Nursing before it was moved next door to what now is called the Gamelin Center.

Owned by sisters since 1951

Since 1951, Sisters of Providence have been owners of the buildings and property, purchased from Sacred Heart and renovated to connect the two buildings. Senior and retired sisters of the former St. Ignatius Province moved into the building in October of that year, along with offices for the Provincial Administration and an infirmary. The connecting structure was a chapel where the first Mass was celebrated in October 1951. The sisters named the complex Mount St. Joseph, after St. Joseph, a patron saint of the religious community. 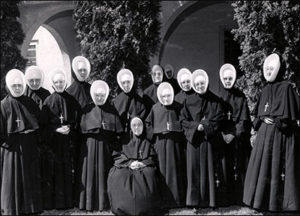 By 1955, there were more sisters living in the building and praying in the chapel than the complex could hold. A new wing was built to the east to house the province headquarters, and other additions included new bedrooms, an infirmary, chapel, kitchen and dining room. The infirmary was on the fourth floor and the chapel on the fifth floor, where the first Mass was celebrated in 1958. Stained-glass windows were purchased from France; a bronze tabernacle was given by Gus Bouten, the building contractor, and a $1,500 Hammond organ was donated in honor of Mother Tarcisius of the Blessed Sacrament by her nephew.

In 1988 there were 55 sisters assigned to live at Mount St. Joseph, 15 sisters in the health-care unit, 10 sisters in the self-care unit, and others living on the second and third floors of the south wing. Renovations over the years provided accommodations for additional offices, a province library, a community room, pantry and television room, laundry facilities on each floor, provincial archives and an area including a large activities room, beauty shop, exercise room and television room.

Closure a matter of numbers

Now fast-forward to the fall of 2011, when the Leadership Team made a decision to transfer sisters from the fourth-floor health-care unit opened in 1957 at Mount St. Joseph to St. Joseph Residence in West Seattle as space became available.

It really boils down to the numbers. The health-care unit needed to be closed because of the small number of sisters requiring skilled nursing care. The impact of this is not just the sale of a building, but the transformation of an important part of the Spokane community. That was clear in January 2013 when the chapel was filled with sisters, Providence Associates, Mount St. Joseph employees, current and former Provincial Administration staff members and friends. They had gathered for a solemn ceremony of remembrance and blessing after the last sister had left the health-care unit.

One by one, in a Reflective Litany of Naming, they called out the names of those who had ministered or lived in the building since 1957. Not only sisters, but also longtime, dedicated caregivers and maintenance, housekeeping and receptionist staff soon would be leaving, too.

In a closing ritual in the chapel at 5 p.m. Thursday, January 30, personal remembrances and stories were shared, followed by a blessing by Bishop Blase Cupich, of the Diocese of Spokane. The theme for the Ceremony of Gratitude and Hope was: “For all that has been, thanks. For all that will be … yes.”

The quote by Dag Hammarskjold was chosen by the planning committee of Sisters Rosalie Locati, Ida Mae Marceau and Pam White, Pam Hedquist of the Providence Archives and Rebecca Nappi of Providence Health Care.

An event rich in meaning and symbolism

The deep meaning and symbolism of the event was apparent from the outside, as it began with a procession of symbols, including the Pietà, representing Our Mother of Sorrows; a statue of St. Joseph, a patron saint of the religious community; the Constitutions and the seven-dolor costume beads of the Sisters of Providence; photos of the Mount St. Joseph building in 1932 and in 1988, as well as of the Jubilarians in 1956; the Sisters of Providence (former St. Ignatius) corporate seal; and an image of the pin worn by Providence Associates. Provincial Superior Judith Desmarais, SP, Bishop Cupich and Father J. Severyn Westbrook, Mount St. Joseph chaplain, followed.

Sister Judith welcomed those gathered, reminding the sisters, associates, staff members and friends of their role in making Mount St. Joseph the home of friendship, service, hospitality and love that it was for more than 60 years. The memories of those years, both happy and sad, represent the end of an era brought to a close by the sale of the building, Sister Judith said. “We will all carry The Mount and all who have come through its doors in our hearts forever.”

Other speakers included Sister Dorothy Byrne, who recalled her first 25 years of religious life spent teaching in Glasgow, Great Falls, Missoula and Walla Walla, and how much she looked forward to summers spent at Mount St. Joseph, as well as retreats, chapters and workshops. She also spoke of an invitation by then-Provincial Sister M. Michelle Holland to her secretary Mary Cosner to bring her new baby and her crib, move her desk into the community room and work there.

Sister Dorothy also described how welcomed she felt when she made a five-week stay at The Mount with a broken hip and the excellent nursing care she received from Sharon Lawson. “We didn’t realize how much we depended on the nursing floor until they were gone,” Sister Dorothy added.

A place, a community and a home

“This was our place, our community and our home,” said Sister Dolores Ellwart, who moved to Emilie Court in September, leaving DeSmet, Idaho, where she was born 84 years ago and served in ministry for decades. She recalled coming to The Mount to teach, serve and give retreats, to visit and celebrate Jubilees. Two knee replacement surgeries gave her an extended time at Mount St. Joseph, as well.

Sister Liz Gress spoke of the closure of several small hospitals and schools between 1980 and 1982 and of helping displaced sisters form community at The Mount. One sister taught dancing lessons and another formed a band.

“I am sad to see Mount St. Joseph go, but I am grateful for the many sisters who came here and helped to make this our home,” Sister Liz said. Providence Associate Bill Bouten called the sale and the closing ritual “a monumental day in the history of Mount St. Joseph.”

Bill said he was born at Sacred Heart Medical Center in 1962 and grew up visiting the convent and knowing the sisters.

In 1986 he worked with his father on a building renovation project where he got to interact with Sisters Peter Claver, Bernadette Botch and Mary K. Cummings.

“This is like selling the family home today,” Bill told the sisters gathered. “You opened your house to us in such a very special way and touched our lives … It is sad that something is ending, but it is such a gift the sisters have given us, these memories we’ll always have. It is an honor to be part of this ministry and to be friends with you.”

Beds, other furnishings, donated to Transitions

Every speaker underscored the relationships created and nurtured at The Mount, between the sisters, the associates, the staff members and friends. In his remarks, Bishop Cupich recognized “the sense of deep loss that pains the hearts of the Sisters of Providence in this moment. There is genuine sadness and heartache this day, which cannot be minimized or overlooked, particularly as you recall all those happy and joy-filled times with members of your community, fondly remembered in the very touching reflections we have just heard. “ … as the bishop of this local Church, I want you to know of my admiration and esteem for the witness of faith you are showing in once again being good stewards of the gifts given to you. You have made a generous decision to see that this much loved place will now take on a new purpose, trusting in God’s Providence, which is a vivid reminder to all of us that Providence is not only a name but a way of life for you.”

Among the recipients of the no longer needed furnishings of Mount St. Joseph was Transitions, a ministry co-sponsored by the Sisters of Providence and three other communities of women religious in Spokane. Its director, Edie Rice-Sauer, said the dressers, beds and linens went to the Transitional Living Center (TLC).

“As you may know, TLC is an apartment complex for single moms and their children, all of whom were homeless before they came to us,” Edie wrote in a letter of thanks. “Before your gift, eight children were sleeping on the floor. The day we moved the beds into TLC, most of the children were still at school and the beds were snatched up immediately from the parking lot by their mothers and used THAT NIGHT by these children, linens and all. What a surprise when they came home from school!”

Other donated furniture and other items went to the Women’s Hearth, Miryam’s House and Transitions’ administrative offices, Edie said. “Your legacy of caring lives on in these gifts, impacting hundreds of families now, and thousands in the future,” Edie wrote. “We are so grateful to you for sharing and even more grateful for your ongoing presence and prayer.”

If the walls of Mount St. Joseph could, indeed, talk, they would tell stories of the caring, commitment and love that has filled its halls for some 60 years. The walls also would say that while there are no more Sisters of Providence living in the building, there are retired sisters just down the block in Emilie Court and other sisters elsewhere in the city of Spokane who are and will forever be true to the religious community’s mission: “The charity of Christ impels us.”

While no longer as visible as they once were, the Sisters of Providence still are here. They know, as always, that Providence will provide.