In October, two Sisters of Providence from Mother Joseph Province journeyed to El Paso, Texas, to heed the cry of the poor. We have all heard about the summer’s unprecedented surge of refugees from Central American countries, many of them unaccompanied children, crossing the border from Mexico into southern Texas. Fear of 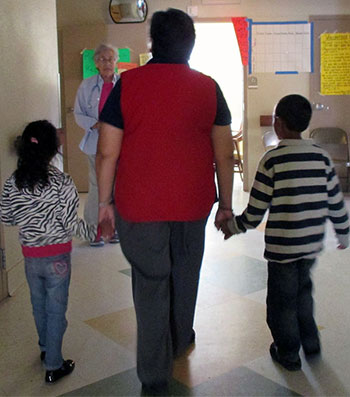 violence and sheer terror were pushing mothers to send their young children and teenagers out into the unknown in search of safety, security and a better life. While the story has faded from the headlines, it is far from over. Sisters Charlene Hudon and Marisol Avila went there to find out more and to see how they could help ease this humanitarian crisis. Sister Charlene stayed for two weeks. Sister Marisol was still there as of this writing. Sister Charlene said before she left for Texas that she did not know what she would be able to do. “I know I can clean toilets, make beds and help prepare for the next wave of people,” she said. “I hope that my little bit of Spanish and my presence will be of some help.” She joined the other volunteers, including lawyers, social workers and counselors, determined to do something to make a difference. This is her reflection on the experience.

The stories told are heart-wrenching

Escaping domestic violence, Juana and her 4-year-old son Ryan fled Guatemala by bus, paying a coyote 10,000 hard-earned pesos for the privilege. After three months in a “family residential center” in Artesia, N.M., she is with her uncle in Ohio.

Dora, traveling with her 11-year-old son Edgar and her partner, was distraught when they were separated at the border crossing from Juarez to El Paso. When the Immigration Customs Enforcement (ICE) learned that the man was not the boy’s father, they took him into detention, processing the mother and child and letting them go. Then the long wait began to try to learn what will happen to him.

Family in San Diego purchased bus tickets that allowed Vilma and her two small children to escape from the threat of domestic violence and possibly death in Guatemala. A terrorized extended family of 10 — a mom, dad, sister-in-law and seven young children — slipped away from their home in Guerrero, Mexico, in the middle of the night to steal across the border. They know the threats are all too real. A family member caught up in drugs and gangs was found murdered, his throat cut and his body dismembered. The father paces the floor while the children cling to their mothers, whose faces are etched with worry.

Sister spends two weeks as a compassionate presence at the border

During the months of June and July of this year, thousands of refugees from Central America surged across the southern border of Mexico and into the United States. The Border Patrol and Immigration Customs Enforcement (ICE) took the people who were seeking asylum, placed them in U.S. detention centers and processed them.

More than 2,500 individuals came through the El Paso, Texas, processing center from Honduras, El Salvador and Guatemala, along with a few from South America. Once fingerprinted and given papers, they were either held at the detention center or sent to other places.

People have always come across the border looking for a better life. Migration is a part of the human existence. But terror and violence have been on the rise. Murders, threats to one’s livelihood, gangs, drug cartels, fear and poverty pretty well describe why families, women with children and unaccompanied youth flee their country and risk all to come to the United States. They take buses, pay coyotes, and slip cash to corrupt police and army personnel to get over the border. Many die on the way and some women have fled abuse in one place only to find it in another.

But what choice do they have? They can stay and be killed or they can suffer the dangers and indignities that await them on the way to el norte.

I don’t know what I would do if faced with those choices. To do what they have done takes great courage. I see them in my mind’s eye and I hold them in my heart. This experience gave me a new insight into the work that the Providence Associates in El Salvador do to save young people from gangs and violence. I see more clearly how the Providence educational scholarship program can lead the way to a better path in life.

Annunciation House is the heart of answering the cry of the poor. It is from there in El Paso, Texas, that coordinators receive notices from ICE that immigrants will be coming to one of the three houses that take in the refugees.

Nazareth House, where I volunteered for two weeks in October, used to be a nursing center for the Sisters of Loretto. As it was not being used, Ruben Garcia of Annunciation House asked the sisters if it could become a transition place operated by volunteers. It is a temporary respite for those who have family or friends in the States. A call is received by a volunteer at Nazareth House and the word spreads that there will be three, four or five families coming that day between 1:30 and 3 p.m. That could mean six people or 36. With a knock on the door, customs agents deliver the families, who once again enter a strange place.

They arrive with literally nothing but the clothes on their backs. For days and perhaps weeks they have been unable to shower or change clothes. They are exhausted and emotionally drained, But within moments of stepping inside Nazareth House, they know that this isn’t like what they had experienced before. They are received with smiles and assurances that they are free here, that they will be given a room to rest and to take a shower in, that food will be served, and that transportation will be provided to take them to their desired destination.

Their stay could be for a few hours, a day or perhaps two. They are invited to take whatever clothing they want, but they don’t take much. Marisol told me about a little boy who wanted two pairs of shoes but his dad said he only needed one pair. He told him to choose one and leave the other for someone else. My Spanish was not good but I tried to show compassion and caring. The refugees knew by touch and hugs that all would be well. I smiled a lot and played with the kids, trying to read to them from a baby book in Spanish with lots of pictures.

I was relieved when they told me what the pictures were saying.

Once volunteers at Nazareth House make connections with family or friends and money for tickets is obtained, the refugees are on their way by bus, plane or car. Each family will leave with a going away bag packed with water, juice, cookies, dry soup and toys and games for the journey. Meanwhile, the volunteers begin cleaning the rooms to prepare for the next wave of guests who will surely come.

What can we do?