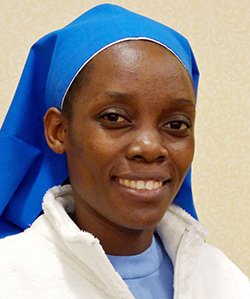 Sister Mary Agnes Namutebi, DM, had a good idea of what to expect when she arrived in Seattle from her home in Uganda on September 5.  For a year she had known that she was coming here, following in the footsteps of scores of Daughters of Mary who have done the same thing for more than 50 years.  They journey thousands of miles to an unfamiliar country and culture to take up residence with the Sisters of Providence and remain there long enough to earn a college degree at Seattle University.

It helped that Sister Mary Agnes would be joining a sister who was a classmate, Paskazia Nakitende, DM. She and another Daughter of Mary, Sister Maria Gorreth Nassali, were right there to show Sister Mary Agnes the ins and outs of this new adventure.

When Sister Mary Agnes was given a Starbucks card, she felt right at home.  She loves coffee, although the beverage dispenser has a different name back home in Uganda.

Sister Mary Agnes wasted no time getting started, with classes in an intensive English language program that began September 18.  Told that she speaks English well, she explained that writing it is another matter.  “It is challenging because American English is so different,” she said.  Once the language program is completed, she will begin studying for a degree in education, aiming to teach at the college level.  It’s tougher to teach children, but as the firstborn of five siblings, three girls and two boys, she knows how to handle them, she said. 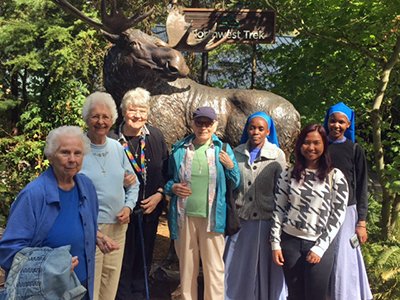 Sister Mary Agnes is no stranger to religious life.  She entered the Daughters of Mary four years ago and her second-oldest sister also is in the religious community, as is an aunt.  “I was attracted to the sisters, how they behave and how they treat others. I think it is within me,” she explained. One of her uncles is a priest.  Her parents are farmers, and her mother also raises and sells chickens.

“At first, I was scared to leave my people and my country,” Sister Mary Agnes said.  She relaxed a bit when she was assured that she would come back to Uganda after she completes her studies.  “That gave me a bit of courage.”

She enjoys riding the bus to school each day. (‘It’s great!  If you miss one, you can catch another.”) Her few hours of free time each day are spent reading and sleeping and she has tried a lot of new foods. (“I try whatever is on the table. I am just adapting.”)

She arrived in Seattle in time to experience the Jubilee celebration, which was later than normal this year because of the General Chapter in Montreal.  The next new experience could well be snow in the winter months, something she has so far only seen in films.