It started with our community at St. Joseph Residence sending birthday greetings to Pope Francis in December 2017. I realized that with my birthday in June, he and I were the same age for six months of the year. In May I wrote to him to share common interests and to thank him for his statements on the death penalty. He responded with an Apostolic Blessing and sent a holy card and medal that he had blessed.

In June, I attended the Sisters of Providence gathering on nonviolence in Pittsburgh with Megan McKenna. She used poetry, images and phrases spoken aloud, written down and spun to make meaning. She shared how these both convert and transform us and bring meaning and hope to the world.

We practiced listening with our eyes (minds) and our ears (hearts) and getting in touch with what was troubling us. Our current political reality gave me more than enough material to explore. On their labyrinth I was able to let go of what had started to chain me down, allowing me to find The Spirit in the middle. I basked in the redirected energy which enhanced my journey throughout the days.

When Bishop Thomas Gumbleton joined the group, he modeled for me the gentle listening and wisdom I would have expected if Jesus were in our midst. In his presence, it felt okay to let go of terrorism and violence — even the remnants of it that I still held onto —  and to trust in taking the hand of Jesus as The Spirit showed me the way … I asked the bishop’s blessing for myself and the group I would be joining in Washington, D.C., as we spent the next days Starvin’ for Justice in front of the U.S. Supreme Court building.

Before midnight of the day when we started our fast, we had our “Last Supper” and opening prayers. Most of us stayed at a homeless shelter a few blocks away. I was inspired to see how this population shared and cared for each other, as had inmates who were the poorest of the poor in the prisons and jails where I was chaplain for 40-plus years. 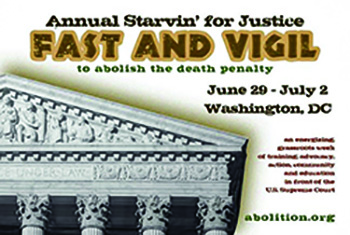 The annual fast and vigil, hosted by the Abolitionist Action Committee, takes place on the sidewalk outside the Supreme Court building every summer from June 29 to July 2. The beginning and end dates of the four-day event mark two important U.S. Supreme Court decisions: June 29 is the anniversary of the 1972 Furman v. Georgia decision in which the Supreme Court declared the death penalty “arbitrary and capricious” and struck down all state statutes. July 2 was the date the court reaffirmed the death penalty, thus allowing executions to restart.

For four days we joined other activists from around the country, fasting and gathering petition signatures, handing out pamphlets and holding up banners, all in the name of ending the death penalty. One of my banner-holding buddies was the brother of the Unabomber. Our group also included victims, families of victims and death row exonerees. The event fell on some of the hottest days of the summer; the coolest was 94 degrees but felt like 104 with the humidity. The Methodist Administrative Building afforded us space to rest, stay hydrated and take a break.

One could really experience The Spirit in the encounters with people passing by: workers, security, tourists, etc., who got into conversation regarding issues and values related to the death penalty. I got to talking to a lady whose son is interested in politics and she really wanted him to hear the values we expressed. She shared that he was doing an internship with Senator Dianne Feinstein.

This really caught my attention since I had worked with Dianne Feinstein when I worked for the Archdiocese of San Francisco. She had supported a United Church of Christ (UCC) minister, some former prostitutes and myself as we set up a program called Women Emerging to assist women who wanted to get out of prostitution. I had heard that she was for the death penalty and wanted to see her, so this lady at our event emailed her son, who got me tickets. This is but one example of how The Spirit was alive and well in our midst.

Every evening was devoted to a speaking program where these “voices of experience” shared their stories. In addition to them, leaders and organizers of national and local abolition efforts were invited to talk about the incredible work of their organizations. I was asked to speak one evening and I shared my story of representing the U.S. prison ministry at a meeting in 1990 at Castel Gandolfo near Rome, Italy. Amongst other prison reforms he hoped for in the United States, Pope John Paul II gave me a mandate to work against the death penalty. This has been my Number 1 priority in ministry. Joining with others who are committed to this end in Starvin’ for Justice was a highlight of my life …

A couple of years ago, when I was testifying against the death penalty in Washington State, a legislator asked me what the Catholic Church thought about the death penalty. I responded that we were against it. He challenged me, saying: “The bishops of the United States hold that public safety is the priority. A couple of months previously an inmate had assaulted and killed an officer at the Monroe Prison. That inmate should surely get the Death Penalty.” While I agreed that this weakened the statement of the bishops, I indicated that when policies are adhered to, prisons are safe in the United States.

Pope Francis continued to inspire us on August 2, 2018, with his insight that we, while keeping the innocent safe, must not deprive the guilty of the possibility of redemption. “In the light of the gospel, the death penalty is inadmissible because it is an attack on the inviolability and dignity of the person,” he wrote.

Emma Tacke of Catholic Mobilizing Network suggests that “one day, there will be a new date this group of committed activists will gather on and it will be to celebrate a new Supreme Court decision: the nationwide abolition of the death penalty.” Until then, our work continues, and the fight for justice persists.

Personally, I am celebrating our success to this turning point in the criminal justice system by beginning introductory training in Peacemaking Circles. It is truly a gift of The Spirit that restorative justice is now working at the Youth Detention Facility in King County in Washington State. It is where I first volunteered in the late ‘70s and felt devastated that all we were doing was locking up the youth in a school of criminality. This motivated me to go into prison ministry in the first place. What an inspiration to join the young officers and staff as we process peace-making into our own lives in preparation to work with the youth. What a blessing of The Spirit to be a part of this … I know that I won’t see the fulfillment of this in the fullness of criminal justice reform in my lifetime, but it is a blessing to be a part of its beginnings.

I thank you for all!