Becca Hawkins brings out the compassion in PH&S caregivers 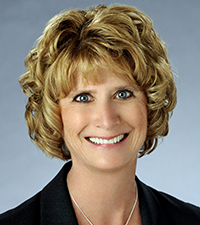 Rebecca (Becca) Hawkins decided at a young age to focus her life on alleviating the pain and suffering of others, so it seemed only natural when she began focusing her studies on palliative care and cancer patients.

In time, her growing awareness that caregivers also were suffering led to a switch into unfamiliar territory. Today, as director of Compassionate Care for Providence Health & Services, Becca is dedicated to improving health care by encouraging caregivers to be kinder, gentler and more compassionate with each other. The difference she is making led to her being chosen by the Sisters of Providence as a recipient of the Mother Joseph Award.

Becca and her physician partner Dr. Mark Rosenberg, program director of Internal Medicine Residency at Providence in Portland, Ore., are a team, along with program manager Laura Daniel. Together, they initiated a growing, nationally acclaimed compassion program that reaches clinical and administrative settings across Providence.

Compassion work is the work of all

“We visualize compassion work as the work of all of us,” Becca explained. “We have partnered with human resources, mission leadership and all the other departments in what we see as collaborative, connective work. It springs forth from people, not because leadership says you should do it.

“We believe that all people are inherently compassionate, but people in health care can get burned out. We create ways to decrease burnout and increase resilience, connecting people back to their authentic hearts.”

Becca’s authentic heart is in a sense of “purpose and responsibility to the world and to others,” instilled by hardworking, family oriented parents raising six children on a wheat ranch in the country near Pendleton, Ore. Becca, the youngest, went to Oregon State College and to the University of Portland nursing school to be a hospice nurse. Although she was not a Catholic, the environment created by the Catholic-based education experience really began to shape her thinking. Directing her studies toward cancer care, she worked after graduation as a hospice and oncology nurse in Portland.

An early focus on oncology

“That set the foundation for where my life was headed, caring for people who were seriously ill.” Becca decided to become a nurse practitioner in oncology, “but I was told that was impossible because there was no nurse practitioner in the field.” Undaunted, Becca enrolled at Oregon Health Science University and got a master’s degree as a nurse practitioner, with a dedicated focus on oncology. That was back around 1989, “when there were only two of us as oncology nurse practitioners in the United States at the time,” she recalled. “Today, I would guess there are 4,000 or 5,000.”

After serving as a nurse practitioner at Oregon Health Sciences University (OHSU), she moved back to Pendleton and then went to work in the cancer center at St. Mary’s Medical Center in Walla Walla, Wash. “I was blessed and lucky enough that they decided to take a chance on hiring for a role that no one knew what that was in 1992,” Becca said. Among her mentors in the tight network of oncology nurses in Portland was Providence Sister Karin Dufault, now general superior of the international congregation in Montreal. Becca left the cancer center in 2001, spent a couple of years in education and then started the palliative care program at St. Mary’s in 2003.

It was providential when Becca crossed paths with Deborah Burton, chief nursing officer at Providence, whom she had known some 30 years prior when they were both oncology nurses at OHSU. It was Debbie who asked Becca to become Providence system director of palliative care and later, in 2014, director of compassionate care. And it was Debbie’s support and faith in what was possible that opened the door for creation of the new Compassionate Care program led by Becca, Mark and Laura. Debbie also was one of the supporters of Becca’s nomination for the Mother Joseph Award.

A catalyst for Becca’s transition from palliative care to compassionate care was a trip to Haiti and Guatemala with Providence Health International to discern the direction Providence would take with international health care efforts.

“There was so much devastation and suffering, but the providers were so kind; there was a wonderful sense of dignity,” Becca said. “Mark and I came home and asked the question, ‘Do you think that Providence is a compassionate health-care organization?’ The answer was, “yes, but . . . “

The work that Becca does today is aimed at removing that “but . . .”

The reward that she gets from her work is “connecting with people in a very deep way, creating space for people to talk about what’s hard,” Becca said. “We’re not good at acknowledging our own suffering. I see a change in people. They say, ‘This is the first time someone’s really asked me how I’m doing.’”

Her contacts extend from the line staff to the top leaders, and of everyone she asks a “very provocative question: ‘Where do you put your suffering or what is hard for you?’” Answering that allows them to express how much they really feel called to their work, but also to say what is hard for them, Becca said. “I am honored to create that opportunity, wherever we work, for caregivers to really fall back in love with providing health care.”

Receiving the Mother Joseph Award for work she is called to do is very special to Becca. The woman she considers her second mother had a great devotion to Mary, the mother of Jesus. Becca, who went to Catholic universities and worked for Catholic institutions, spent so much time with that family that she laughingly considers herself an “honorary Catholic”. “I absolutely love the history of the Catholic sisters and I feel so honored to receive this award from them. “ That the award honors the attributes of Mother Joseph is incredibly humbling, she added.

She continues to work one day a week at St. Mary’s and is delighted to be receiving the award at Providence Academy, the first building Mother Joseph constructed in the West. She and her husband Garry Zollman, owner of a water well drilling business, will savor the moment with their three children, Taylor Lovell, a nurse in Salem, Ore.; Marissa Lovell, who works at a public relations firm in Boise, Idaho; and Shaina Zollman, who is pursuing a degree in natural resources in Corvallis, Ore.

“I have been so patient-focused that I never would have guessed I would end my career this way, focused on compassionate care for the organization,” Becca said. “My dream is developing a compassionate coalition in Catholic health care. I want to create arms big enough to really hold everybody.”

The difference that would make is huge, she explained, recalling a round of layoffs in different ministries when she first began in this new role. The challenge she and her team members presented to employees was that really having compassion meant having compassion for the leaders who had to make those tough decisions.

“To think what it was like to be them was really eye-opening for us. We opened our own hearts and opened the hearts of a lot of others,” Becca said. “I don’t think anybody understands how the leaders lay awake all night thinking about those decisions. Hearing their hearts made us pause, think and offer them compassion.”

“We’re doing the work of the sisters, delivering quality care to the vulnerable, but we’re also true to our hearts,” Becca said.

Becca Hawkins was nominated for the Mother Joseph Award by several of her Providence colleagues. Some of their comments follow.

Laura Daniel, program manager for Compassionate Care, related how Becca helped the staff adopt a co-worker undergoing a fight with cancer. “Without hesitation and loving our co-worker with an unnerved heart, Becca took upon herself to assist with care coordination, medical consultation coordination and offered palliative care skill to help our co-worker to see hope, joy and life – while her medical diagnosis told her that she would just live for 6 months. Becca involved us all in prayer, daily reflection, encouraging self-compassion as we all walked alongside our co-worker through this fight. It has been an astounding journey in personal reflection about our relationships with each other, our co-worker, with ourselves. Becca’s ability to hold – really hold suffering of others – with such grace and gratitude is a pillar unto itself.” Nine months later, that co-worker is thriving.

Dr. Mark Rosenberg, program director for Internal Medicine Residency for Providence in Portland, Ore., met Becca while both were in Haiti, six months after a large earthquake. “It was a privilege to watch Becca’s heart open to the people of Haiti,” Mark said. It took courage and strength for her to stand on the rubble of a field where the nursing school had collapsed, “killing an entire class of nurses, to stand in the center of the tent city that housed 150,000 people in Port-au-Prince and to be there with the people of Haiti,” he said. Becca saw the humanity of the people, he added. “She was the eyes and the heart that allowed each of us to feel the depth and meaning of the experience. With words from her mouth and emotions of her heart, she inspired the team to really consider how our work could be of true service to the needs of the people.” Becca showed a “deep love for humanity, rather than pity or sympathy.” Back in the United States. Becca organized a forum for employees to discuss concepts of suffering and compassion, offering a safe opportunity to share things that were hard for them within their work with each other. Becca could stand with and support them without trying to fix their suffering, Mark said.

Deborah Burton, chief nursing officer for Providence, described Becca as “one of the most compassionate and humble human beings on the planet”.

“Like Mother Joseph, Becca is no shrinking violet; she has the highest expectations for herself and others,” Deborah said. “She speaks up on behalf of the poor and vulnerable and for those who need access to better care, comfort and compassion.”