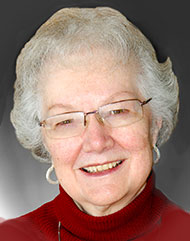 “YOU WILL ALWAYS LIVE IN INTERESTING TIMES!” That was my message from a fortune cookie earlier this year. I decided to check it out.

Looking back for those of us who entered the novitiate in 1939, in 1944 or 1953, we found the community of the Sisters of Providence much as it had been for the past 100 years. We learned things like mental prayer, religious silence, “modesty of the eyes,” “silence of action,” and all kinds of quaint signs we could use to ask for butter, salt and pepper, and dessert without raising our eyes or speaking a word. It was an adventure, to say the least.

We learned the motto, “The Charity of Christ impels us!” We took it to heart. We dreamed of sanctity, took our vows and received new names.

Our first “missions” were usually teaching in one of the many parish schools, where the religious community was paid a stipend of $50/month to cover living expenses. The convent was supplied by the parish, and our classrooms were packed with 40-50 students who had been well disciplined by the sister who taught the grade the previous year. I can remember how startled I was when I first walked in the door of the fifth-grade classroom at St. Patrick’s grade school in Walla Walla to have 42 10-year-olds snap to attention with “Good morning Sister Paulette.” They were well “starched.” I can’t forget their earnest faces …

There was little Marian who one day dove into my stomach in agony because someone had put the African violets on the outside of the window sill to catch the fall rain – rare in Walla Walla — and she sobbed, “It’s gonna die!” I wonder if she still grows African violets.

And … Rocco – the entertainer who could only be focused when I finally had him sit in the space under my desk. There was no other space in the classroom.

And we were startled and excited by Sputnik and the United States entering the space age.

We remember the sixties and a new class of postulants. Ah! The sixties. They were interesting times. That decade when the cultural revolution, Vatican II, the Vietnam War (1964), Women’s Lib, the walk on the moon, and the rewriting of our rules all packed into one decade. We remember the shock of our co-workers when we first showed up with our hair showing!! And we especially remember the special patients. The grandmother in the Emergency Room sobbing “Poupe” Poupe,” as she rocked back and forth holding the body of her six-year-old granddaughter who had drowned in the backyard pool. And Philip, the seriously burned, recovering alcoholic, who “lived” on a circo-electric bed for months while he endured multiple skin grafts – and while he prayed and sang in his rich baritone voice to the crucifix on the wall — “Sweet Jesus, look down on a sinner like me!” .. And we gradually migrated into new missions and looked to make justice in our society.

We heard the scriptures tell us that “The Lord Hears the Cry of the Poor” and we enthusiastically joined the Civil Rights and Peace movements. I specifically remember and the march on Washington, Resurrection City and Martin Luther King’s “I Have A Dream” on the steps of the Lincoln Memorial. We were there! We were there, too, traveling in army personnel carriers through the streets of our nation’s capital under martial law during the Martin Luther King riots – to distribute food in the neighborhoods where rioters had burned down the grocery stores.

And we were tear-gassed along with the poor people sneaking out after curfew to get that food. … And the smell of frangipani — or was it marijuana> — at the demonstrations in Girardelli Square in support of the efforts of the people in the San Francisco for “equal justice for all … ”

The 70’s introduced Computerized Tomography – Magnetic Resonance Imaging, proliferation of antibiotics and single-dose packaging, “doc in the box,” … and the beginning of ultrasound and endoscopy in place of more invasive surgery. To say nothing of the government’s invention of “Diagnosis Related Grouping” and Certificates of Need to attempt to control health care costs. We met these challenges and our health care system grew and flourished.

Our companions, employees and doctors working with us in our healthcare ministries began to call themselves “People of Providence” and it caught on as they found themselves in more than a job – in ministry.

In the schools, we helped to introduce “new math” reduced size classrooms, Sisters continuing to move into parish ministry and away from the classrooms.

The ‘80’s brought continuing adjustment as many of our companions left the community to raise families and to bring their gifts and inspiration to other ministries than those of the community of Providence. For the first time in the history of our community, we were becoming smaller … and we faced the heartbreak of closing some of our missions where we had poured out our hearts and our energies to bring the wonderful message of the gospel to the poor.

But we welcomed increasing numbers of sisters who came to join us from other countries and we formed coalitions with other communities — here in Washington finding that we had a lot in common with the Sisters of St. Joseph of Peace, Dominicans, Franciscans, the Little Company of Mary, the Holy Name sisters and even the Jesuits and the Benedictines. Our coalitions formed co-sponsorships of the Intercommunity Peace and Justice Center, the Northwest Coalition for Responsible Investment, Mercy Housing Northwest, Transitions — and nationwide, the Leadership Conference of Women Religious.

At the turn of the century, when the planet did not implode, we became increasingly aware with the author Ronald Rolheiser, that “all that is, is holy.” The wounded, wondrous, concerned, caring, earnest faces of those among whom we’ve served found their way into our hearts and our memories as we grew older. We believe with the poet that “The World is charged with the grandeur of God” as we have more time to see the glory of our sunsets and the amazing life of flowers, trees, animals and, yes, even bugs as just a glimpse of the eternal liveliness of God in our world.

The dream was certainly bruised if not shattered on 9-11-2001, when we awakened to terror on home soil. Once again, we did our best to get out the message that war was not the answer, but helplessly watched as our nation plunged into its longest war …

Two of us spent time in the Walla Walla Maximum Security Prison teaching English as a Second Language or assessing the quality of the health care provided to the prisoners.

Even though each generation has its evils, there are still great surprises. Who could have predicted that in our time we would have elected an African-American President or a Pope from South America who says that he prefers a Church which is bruised, hurting, and dirty because it has been out on the streets … ?

Today, as we rejoice for these amazing years of grace, we thank God for all of you who are part of who we have become and for what we have been able to do … for your devotion in continuing your own goodness in our world, for helping to spread the good news that ignorance, terror, hatred, and greed will not prevail … for living out the dream of those who have gone before us and those who are yet to be born.