Editor’s note: Sister Helen Brennan, the last Sister of Providence to leave Fairbanks, Alaska, in 1978, returned there this summer for a special celebration. Her thoughts on that experience follow. 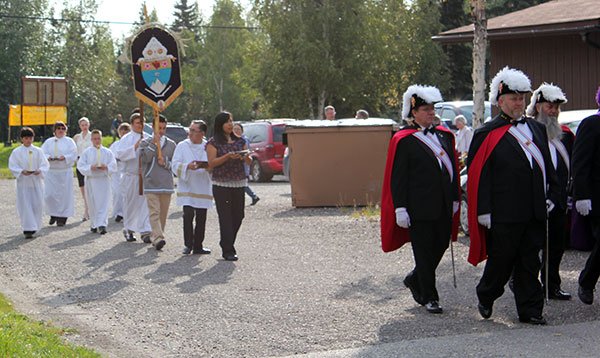 The celebration began Saturday with a bus tour of the area churches and the Catholic School. First stop was Immaculate Conception, the historical church and Fairbanks landmark founded by Father Francis Monroe, SJ, in 1904 in connection with the “Alaskan Gold Rush.”

The church is small, but its weekly activities include a Saturday afternoon soup kitchen and an extensive outreach program to support the homeless, elderly and sick. The church’s unique stained glass windows include two by artist Judy Killian at the entrance that depict the active involvement of women in the church. Immaculate Conception Church faces the Chena River and is next to the former St. Joseph Hospital. A flood in the summer of 1967 caused severe damage, forcing the closure of the hospital which was staffed by the Sisters of Providence until 1968.

Many changes to school

Next on the tour was Fairbanks Catholic Schools on Monroe Street, which enrolls about 500 K-12 students. One of my former students, Vincent Fantazzi, is the principal of Monroe High School. Happiness is Paying Our Way (HIPOW), the annual fundraiser, is the main source of funding for the primary and secondary education. Father Francis McGuigan, SJ, organized HIPOW, which has been continued by laypeople since his death.

I have returned several times to see the marvelous additions to the school, including the beautiful Holy Family Chapel, the centerpiece of the Catholic Schools of Fairbanks. The chapel bridges the grade school and the junior/senior high with a multipurpose room, common area, central school offices and a band room. Local artists were invited to submit proposals for various elements of the chapel, including the wooden stations of the cross using hands rather than people, the wooden crucifix, the statue of the Holy Family, the Holy Water Font with images from scripture carved into the vessel, a wooden stand for the Font, and the Luminous Mysteries of the Rosary. The Seasons of Praise is a plaque which includes the names of the religious communities that served at the school over the years. 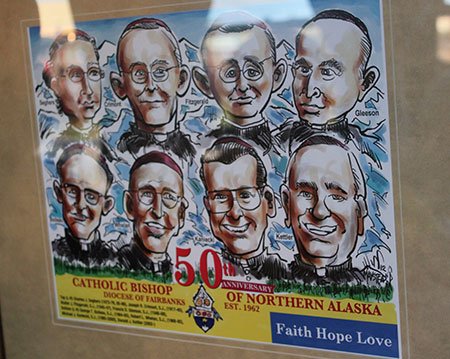 The tour continued to North Pole, Alaska, which is 14 miles south of Fairbanks, and to St. Nicholas Church. Here we celebrated Mass in which the pastor shared about the history during the homily. The tabernacle is a log cabin which is from the original church.

Following the Mass, we were invited to walk around the welcoming and friendly complex. This building was well planned and very functional. Especially with the cold winters, it is nice that everything is all contained in one place. Santa Claus House, one of the highlights for tourists, is always a must to purchase special Alaskan and Christmas items and it has real reindeer next to the building.

Next came St. Raphael’s Church, also in Fairbanks, which is quite new with expanded space for gatherings and offices. St. Raphael’s is surrounded by a neighborhood located in a dense forest. The church caters to the sick and the poor in keeping loyal to its motto, “Helping, healing and hospitality with God.” Several of the parishioners shared their history.

The church has a completely white Jesus with his hands lifted above his head rather than stretched out on the cross. It is a creation of a local ice sculptor, Steve Brice. Other pieces of art donated by parishioners can be seen around the building, including a framed face of Jesus made out of various types of wood and a Yupik oil lamp made out of stone that could have been created 2,000 years ago.

The last stop was a delicious lunch of Alaskan halibut with the president of the University of Alaska, General Patrick Gamble, and his wife Ailese in their lovely home. The perfect weather allowed us to sit outside and enjoy the sun.

Afterward we drove around the University of Alaska to see the magnificent new museum, which is in the shape of a whale.

Saturday evening we were invited for a ride on the Sternwheeler Boat to cruise down the Chena River and to honor Bishop Donald Kettler for his 10 years, the Jesuits for 125 years of the Jesuits, and some of the sisters for their 25 years of service. 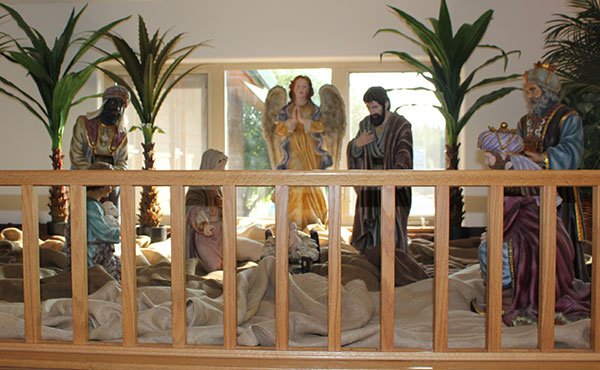 Sunday offered a truly multicultural Mass at Sacred Heart Cathedral, Fairbanks, with a procession that began at the chancery. The choir was a combined group from several parishes. Present for the Mass were visiting bishops, priests, deacons from various native villages, women religious from various communities, and Msgr. Robert Fuhrman, assistant national director of the Pontifical Mission Society.

During the homily, Bishop Kettler again welcomed visiting bishops from Anchorage, Juneau, Seattle, Bend, Spokane and Sioux Falls, S. D., as well as priests and parishioners. He asked for forgiveness of those still struggling to heal wounds left by decades of sexual abuse and encouraged the assembly to give thanks and move toward the future. He emphasized the need for all to help in the healing process. Bishop Kettler has been meeting with the victims and continues to assist in their healing.

The petitions during the Mass were spoken in Tagalog, Yupik and Athabascan.

A marvelous reception held across the street at Pioneer Park included lunch, a PowerPoint presentation on the history and a panel of about 10 natives to share their vision. The last one to share was a very well-known native who challenged the bishops for not doing their job but said he supported the sisters who were faithful to the mission of Jesus. There were special projects for the children to attend during the history and sharing.

In addition to weekend’s formal celebration I enjoyed two other activities of particular interest to me.

Many of the Jesuit Volunteers have remained after their volunteer ministry and some still are teaching at the school while others went into the public school system. Several have married and still are very involved in the mission of the church. They formed lasting relationships. It was a great pleasure to visit with them, as well as former students, and to recall the fun and meaningful experiences.

It was also a great pleasure to visit with Michael Stepovich, Sr., the last territorial governor, and his children Michael, Dominic and Andrea, who is the librarian at the school. He is in his 90s and very alert. They had lived next door to the sisters’ house on Monroe Street. The family had 13 children and I taught four of the older ones in the third grade.

The Alaskan Spirit is very much alive in me, as well as in many Alaskans. I am delighted to see that God is alive in the hearts and minds of many. For this beautiful experience, I am most grateful for the opportunity of attending this memorable occasion. Providence of God, I thank you for all.