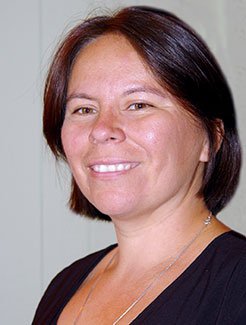 Sister Vilma Franco made profession of perpetual vows of poverty, chastity and obedience as a Sister of Providence in a liturgy at Sunday, October 7, at St. Aloysius Parish, in Spokane.

Sister Vilma, a native of the department of Chalatenango in El Salvador, came to Seattle to enter the Sisters of Providence in 2002 along with Sister Margarita Hernandez, who recently renewed her first vows. Sisters of Providence have been in El Salvador since January 1995. In February 2002, for the first time, the sisters hosted their international General Conference there.

“We are blessed as a community to have Sister Vilma share with us her life and her experiences of God’s action in and through her,” said Provincial Superior Karin Dufault, SP. “She has a generous spirit and a heart that draws her to service of those who are most vulnerable, especially children.”

Sister Vilma lost her father and six brothers in El Salvador’s civil war from 1980 to 1992. After the war, she and her sisters relocated with their mother to the department of the Usulután in the coastal zone of El Salvador. She was living with her mother, a sister and a niece in the community of Angela Montano when Sister Fran Stacey moved there in 2000. While assisting with the youth ministry, Vilma expressed a desire to be a sister and was encouraged by Sister Fran to pray and explore this call.

Her involvement in ministry with the sisters led Vilma to want to learn more about the Sisters of Providence and how to become a member of the religious community. She participated in a Come and See experience in La Papalota and in the Sisters of Providence pre-candidate program in San Salvador. The latter included basic community living skills, personal development and group skills. She also attended Jose Simeon Canas Central American University, a Jesuit university in San Salvador.

Sister Vilma was welcomed into the religious community as a novice in a prayer ceremony on August 15, 2004, at the annual Provincial Chapter in Spokane. She and Sister Margarita joined other Sisters of Providence novices in Chile for their canonical year to explore in depth the call to vowed life in the religious community.

Her perpetual vow ceremony was bilingual, in English and Spanish, and the songs, decorations and food at the reception that follows will integrate the congregation’s international and intercultural flavor.

“I chose the theme, &lsquolsquo;Come Follow Me,’ for my final vow ceremony because every day I feel that God is telling me that,” Sister Vilma said. A dream comes to her every day with an image, she explained. “The message is to follow Him anywhere, even though I am afraid.” What she feared, she added, is that she would never speak the answer to God. She saw the suffering of the poor and experienced a different reality, but could do nothing about that suffering without God’s help, she added.

Since she began her journey with the religious community, Sister Vilma has focused on learning to speak and read English, one of many barriers she faced in coming to a new country, culture and the historical reality of the U.S. government’s involvement in the war in El Salvador. Another was being away from her mother, with whom she is very close. “Still, God said, ‘Come and follow me,’ and I knew he will take care of me.”

The experiences she has had in the last decade have helped her to grow and to become more accepting of this very different culture, she said. “This is my home now, but I also want to go back and help my people. They need someone to speak for them in Spanish and in English.”

None of her birth family was in Spokane for her vow ceremony, “and that is hard for me,” Sister Vilma said. “But they will be in spirit with me, just not here in a physical presence and body. God gave me a different family to love and support me in the sisters, the lay people and the staff here.”

Sister Vilma is in her second year of community college studies in Spokane and will complete a degree and a certificate next spring in child development. She has loved serving as a volunteer in the school’s day care program and for the L’Arche community, and she plans to serve in ministry with the disabled. “I want to work with children, wherever they need me,” she sai She hopes to work with disabled children in El Salvador, who do not receive care and support now. “I want to show a different way to take care of them and to see them as human, like one of us,” she added.

Sister Vilma is one of 145 women who are vowed members of the Sisters of Providence, Mother Joseph Province, which includes Washington, Oregon, Idaho, Alaska, Montana, California and El Salvador. The province is international, intergenerational and intercultural, and includes four novices and three sisters in temporary vows, including two from Bernard Morin Province in Chile who are continuing their formation and discernment in this province.