Sister Karen Hawkins responds to the needs of our southern neighbors 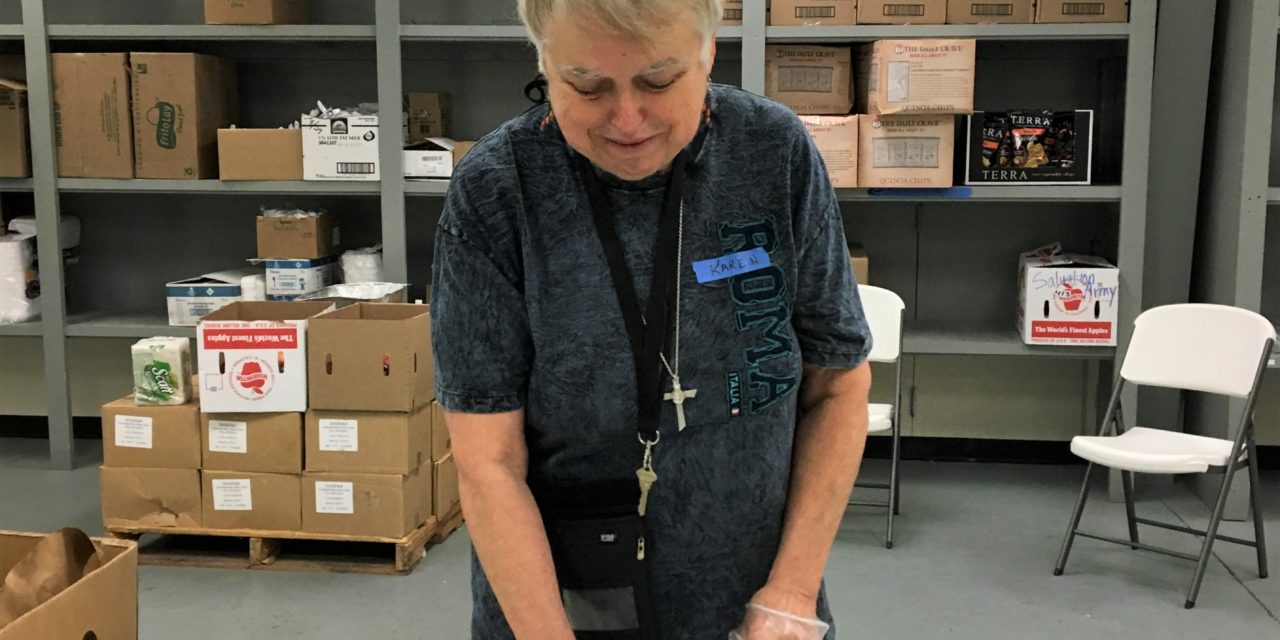 Volunteers are vital to meeting the demand for services near the border, and women religious have long been answering the call for help.

Earlier this year, Sister Karen Hawkins responded to an appeal from the Leadership Conference of Women Religious (LCWR) who asked for volunteers to aid immigrants at the U.S.-Mexico border in El Paso, Texas.

Sister Karen served at Annunciation House from April 27 to May 11, 2019. The Catholic nonprofit has been working in El Paso since 1978 operating houses of hospitality for migrants and refugees. An all-volunteer staff provides shelter, food, clothing, showers, medical attention and social services for a flood of Central Americans who have walked hundreds of miles over several weeks in hopes of finding safety and a better future in the U.S.

Life at the U.S.-Mexico border is a complex intersection of immigration, economic development, human rights and social justice issues, steeped in politics. But for Sister Karen, it was about offering compassionate love and standing in solidarity with those who are poor and vulnerable. It was about being the face of Providence for those who are suffering.

When she arrived in the dusty, sweltering border-town, Sister Karen was assigned to a rented warehouse set up to shelter and support 500+ people, primarily families. The Salvation Army provided food, and the Red Cross supplied sleeping pads and bedding. Individuals, groups, businesses, nonprofits and faith communities filled in the gaps the best they could to provide the basics for people arriving with nothing.

It was an eye-opening experience for Sister Karen. “I was shocked when I first arrived for orientation because there’s no indoor plumbing,” she said. “You see all these outside porta-potties. You walk into the warehouse and there’s wall-to-wall cots. There are no laundry facilities.”

Even with limited Spanish-language skills, Sister Karen had plenty to do, including intakes, working in the clothing bank, preparing meals, accompanying immigrant travelers to the bus station or airport, and anything else required in the moment.

Sister Karen explained what it was like for families who passed through. They started by meeting with a volunteer who filled out an intake form with information about country of origin, number of children and their ages, whether anyone is sick, if anyone in the family has been detained, and their sponsor’s contact information — a requirement for even a chance to stay in the U.S. The sponsor is responsible for paying the family’s transportation costs to their destination. Those who have been processed by Immigration and Customs Enforcement (ICE) are given a court date within two weeks in the city of the sponsor. Even after all of this, there is no guarantee they will be able to stay.

After the intake, the first thing most people asked for was a shower. At the back of the facility there was a semi-truck with water piped into it where they could take a shower. Volunteers provided clean towels and donated clothing since families arrived with only the clothes on their back. Each person would get new socks and underwear. If there were clothes that fit, they would also get one shirt and one pair of pants. The women would often wash out whatever clothes they had and hang them on the fence around the warehouse to dry. And, because ICE would confiscate belts and shoelaces (they are considered a safety risk), people would go without unless someone specifically purchased or donated these items.

Though there was a small play area, there wasn’t much to occupy the children. “They didn’t have any toys,” said Sister Karen. “There were a few in the clothing room, so if a child was crying we’d give them a toy if we had one. One of the little girls picked up a Barbie doll. There was only one. Her mother told her to put it back. I assured her she could have the doll. The little girl grabbed my legs and gave me a hug. She was so grateful.”

Though food was provided, often there wasn’t enough. “Lunch might be one chicken tender and six tater tots,” said Sister Karen. “Breakfast might be a small box of Cheerios, half a glass of milk, and a half a banana if we had fruit that day.” What struck Sister Karen, however, was that people were always saying thank you, and always so gracious.

Sister Karen accompanied families to the bus station and the airport to help them with the tickets and travel plans to get to their destinations. “I don’t speak much Spanish, so it’s a miracle that I could do this,” she said. The families had no money or cell phones, and for food they had only peanut butter and jelly sandwiches for the duration of the trip.

The Sisters of Providence sent Sister Karen with $400 to help with expenses. “One of the ways I used the donation was for laundering towels,” she explained. “Another was to buy peanut butter and jelly or bread if we ran out of food. We’d run out of boys underwear quite frequently, so we would buy it. On the last day I was there, a woman went into labor, so we took her to the hospital. They kept the baby in the hospital because it was jaundiced. They gave the mother a breast pump to pump milk, but there was no refrigeration for her breast milk. So we actually bought a small refrigerator.”

Several times, Sister Karen found herself with Providential opportunities to offer extra help at just the right moment: to get medical care for a boy with a fever who needed to catch a bus the following morning, to provide money for a meal for a family stranded at the airport when their flight was delayed, or to share her cell phone with a family member desperate to make a call.

Sister Karen heard remarkable stories of hardship and pain, and they stuck with her. Sometimes all she could offer was prayer. One man there with his 11-year-old daughter shared that in his home country a gang had kidnapped, raped and murdered his 13-year-old daughter. He was seeking asylum because he didn’t want his younger daughter to suffer the same fate. A woman whose husband had died was traveling with her 18-year-old son and a younger child, but they were split up. She and the younger child were sent to Annunciation House, but her 18-year-old was sent to detention. She wanted to wait for the 18-year-old, but he was expected to be sent back to a country where he had no safe place to go.

Bearing witness to such suffering weighed heavily. At the end of each long day, Sister Karen was hosted along with other women religious volunteers by a community of Loretto Sisters in El Paso. She was grateful for a chance to process her experiences in a supportive environment. “At night we would eat together and talk about our day,” Sister Karen said. “It helped being with other sisters who were going through the same things. You had to pull up the light moments in order to get through the dark moments.”

Sister Karen’s two-week border ministry left an indelible impression, from the heart-breaking to the heart-warming. On reflection, she kept coming back to the gratitude of the immigrants for so little that they received. She acknowledged the generosity of volunteers from El Paso and all corners of the U.S. who gave time, talent and resources to do what they could for their neighbors at the border. And Sister Karen recognized the presence of a Provident God throughout: “Providence just kept putting me in the right place at the right time to help.”

Sisters of Providence Constitutions and Rules call on us to attend to the needs of those who are poor and to situations of injustice which oppress them. We consider it a duty to promote human dignity by acts of solidarity with persons and groups, sharing what we have with them. In our response to the call of social justice, we strive to eliminate the causes of poverty according to our possibilities. Love of God and love of neighbor move us to share not only our material resources, but also our spiritual gifts, time, talents and knowledge.

In 2015 the Sisters of Providence adopted a corporate stance supporting comprehensive immigration reform that:
• Outlines an earned legalization program that would allow foreign nationals living in the U.S. to apply to adjust their status to obtain lawful permanent residence and eventually full citizenship
• Supports a future worker program to permit foreign-born workers to enter the country safely and legally, and includes workplace protections and living wages
• Safeguards against the displacement of U.S. workers
• Changes family-based immigration to increase the number of family visas and reduce waiting times for family reunification.
• Restores due process rights taken away by the 1996 Illegal Immigration Reform and Immigrant Responsibility Act
• Addresses the root causes of migration in sending countries, including poverty, civil warfare and lawlessness
• Focuses law enforcement on those who truly threaten public safety, e.g., drug and human traffickers, smugglers and would-be terrorists, in a targeted, proportional and humane manner.

Today, Sisters of Providence volunteer at the border, administer a scholarship program in El Salvador to give youth an alternative to joining gangs or becoming gang victims, participate on a committee to educate and advocate for immigrant rights, and provide financial support for nonprofits that serve migrants and refugees. Sisters of Providence also collaborate with other congregations of women religious to speak out publicly about related issues, like the recent letter co-signed by 663 members of the Leadership Conference for Women Religious calling for President Trump to put an end to divisive language which targets people like our brothers and sisters of various national origins (more at https://bit.ly/2nf1hbH).

What can we do?

• Learn about immigration issues, in the U.S. overall and in the places where you live
• Share information about immigration issues with your friends and on social media
• Contact elected officials and urge them to address immigration as a humanitarian issue
• Join groups that promote justice for immigrants
• Volunteer at the border or in your community for an organization that supports migrants and refugees
• Pray or attend a vigil